No One Ailing Except a Physician

by Duane A. Smith and Ronald C. Brown 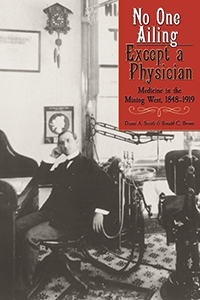 From burying scurvy victims up to their necks in the earth to drinking kerosene mixed with sugar to treat influenza, mid-nineteenth century medicine in the mining communities of the West usually consisted of home remedies that were often remarkable for their inventiveness but tragically random in their effectiveness. Only as a desperate last resort would people turn to the medical community, which had developed a deplorable reputation for quackery and charlatanism because of its lack of licensing regulations and uniform educational standards. No One Ailing Except a Physician takes readers back to those free-wheeling days in the mining towns and the dark recesses of the mines themselves, a time when illness or injury was usually survived more due to sheer luck than the interventions of medicine.

In this important new contribution to both mining and medical history, historians Duane A. Smith and Ronald C. Brown present a detailed analysis of the ailments that confronted the miners and the methods with which they and their doctors attempted to "cure" them. The occupational hazards of mining, with its strenuous labor and exposure to the elements, contributed to the miners' vulnerability to disease and injury, which was further worsened by the typical miner's refusal to heed prevailing medical wisdom and common sense, often leading to easily preventable diseases such as scurvy. And because medical science of the era had not progressed much beyond that of the ancient Greeks, such debilitating diseases such as cholera, influenza, dysentery, and malaria proved to be virtual death sentences, to say nothing of occupational accidents with fires and explosions, mine collapses, and safety cage mishaps.

This book is a must-read for both mining and medical historians, as well as the general reader interested in the history of the American West.

Ronald C. Brown is professor of history and dean of University College at Southwest Texas State University. He is a founding member of the Mining History Association and is the author of Hard-Rock Miners: The Intermountain West, 1860-1920.