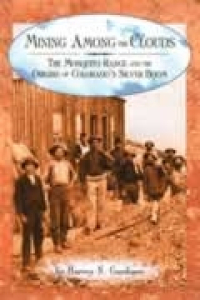 "[D]etailed yet accessible. . . . If you've got any interest in Colorado's mining lore, you'll be glad you read it."
—Colorado Central Magazine

In Mining Among the Clouds, Harvey N. Gardiner examines what one reporter dubbed "aerial" mining—silver mining at such high altitudes that the miners were literally working among the clouds. In the summer of 1871, two prospectors ventured high up Mount Bross in Colorado's Mosquito Range. There they discovered an outcropping of silver ore in blue limestone. An unprecedented find, it set off strike after strike in Park County. Thus began the silver boom that gave rise to Leadville, laying the foundation for Colorado's Silver Decade.

Harvey N. Gardiner is an archivist at the University of Colorado Libraries at Boulder. He holds an M.A. in history from Southern Illinois University. He has been researching and publishing on the history of high-altitude mining in the Mosquito Range for over twenty years.