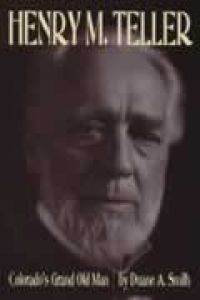 Serving longer in the U.S. Senate than any other Coloradan, Henry M. Teller was one of the Centennial State's greatest statesmen and political leaders. Now Duane A. Smith, author of Horace Tabor: His Life and the Legend, rescues this larger-than-life figure from obscurity in this definitive biography of the Central City lawyer turned Colorado senator.

Teller was a prime example of what a politician should be in an era when elected officials left a great deal to be desired. As Colorado's representative, Teller stated his beliefs and stuck by them. Not all agreed with him, but all admired him for his honesty and integrity. His legal career in Colorado encompassed much of the early legislation in the territory, such as developing mining law and the organization of the Colorado Central Railroad, while his Washington career touched on nearly every important western economic development issue that occurred in Colorado between 1876 and 1909. Teller declared to the U.S. Congress that Colorado was a part of the nation, and that the West deserved a say in its decisions.

Incorporating extensive primary and secondary sources, federal documents, the Teller papers, a wealth of newspaper articles, and a superb array of photographs, Smith's biography will be a wonderful source for anyone interested in Colorado history and the political past of the state and nation.