Silent Western Films, American Culture, and the Birth of Hollywood 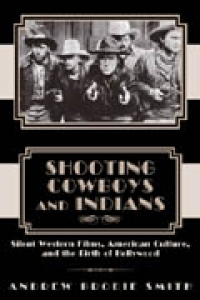 "Smith (an independent history scholar) provides a thoughtful history of the very early western, perhaps the genre's least-studied and least-discussed period . . . a useful and interesting addition to film collections."
—CHOICE

"Andrew Brodie Smith received his Ph.D. in history, but, to his credit, he eschews the pedantic approach that academics usually favor in delineating the Western film genre. He presents a readable chronicle of the genesis of Western film development."
—Journal of the West

"The first serious study to focus primarily on the silent-era western, Smith's meticulously researched history focuses on the earliest years of narrative filmmaking, from its silent-picture origins in the 1890s to the birth of talking pictures in the 1920s."
—Juliana Spahr, American Literature

"[W]hile the book might appear to be merely about silent westerns, for once the wider claims of a book's title are justified. This really is about American culture and the birth of Hollywood, and so deserves to have a wider readership than merely the fans of 'horse operas' and I suspect it will gain recognition in this regard among other film scholars. . . . [W]e leave Smith's book with a clear impression of the major issues and developments in the early western . . . the research runs deep."
—Early Popular Visual Culture

Academics have generally dismissed Hollywood's cowboy and Indian movies—one of its defining successful genres—as specious, one-dimensional, and crassly commercial. In Shooting Cowboys and Indians, Andrew Brodie Smith challenges this simplistic characterization of the genre, illustrating the complex and sometimes contentious process by which business interests commercialized images of the West.

Tracing the western from its hazy silent-picture origins in the 1890s to the advent of talking pictures in the 1920s, Smith examines the ways in which silent westerns contributed to the overall development of the film industry.

Focusing on such early important production companies as Selig Polyscope, New York Motion Picture, and Essanay, Smith revises current thinking about the birth of Hollywood and the establishment of Los Angeles as the nexus of filmmaking in the United States. Smith also reveals the role silent westerns played in the creation of the white male screen hero that dominated American popular culture in the twentieth century.

Illustrated with dozens of historic photos and movie stills, this engaging and substantive story will appeal to scholars interested in Western history, film history, and film studies as well as general readers hoping to learn more about this little-known chapter in popular filmmaking.

Andrew Brodie Smith received his Ph.D. in history from the University of California, Los Angeles. He lives in Washington, D.C. and works as a writer, book dealer, and consultant for nonprofit organizations.