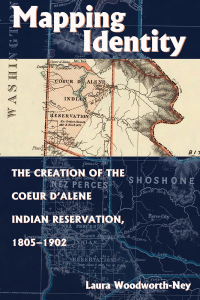 "Based upon Jesuit and federal records, the book offers a solid accounting of shifting Coeur d'Alene boundaries—both mental and mappable."
—American Historical Review

"In Mapping Identity, Laura Woodworth-Ney moves the story a step beyond the standard narrative, demonstrating that making and unmaking boundaries is intertwined with the imagination and articulation of political identity. . . . The creation of the tribe and the mapping of the reservation had consequences for both Indians and non-Indians, in the ways they imagined themselves and in the ways they interacted with the environment around them. . . . This is a well researched, readable, and interesting book."
—Western Historical Quarterly

"Professor Laura Woodworth-Ney portrays the Schitsu'umsh people—known today as the Coeur d'Alene Tribe—as shrewd survivors imbued with unique motives, interests, and strategic objectives. She traces their roughly hundred-year struggle for cultural and social survival, during which the Shitsu'umsh leadership fashioned effective adaptation strategies in response to incursions into their aboriginal territories. . . . But it is the book's focus on the charismatic leader Andrew Seltice—whom Woodworth-Ney depicts as the embodiment of the shrewd, survivalist bent of the Schitsu'umsh people—that enables the reader to understand the sharp intratribal conflicts and divisions engendered by Seltice's decision to acculturate and assimilate . . . Professor Woodworth-Ney wisely leaves it to the reader to judge whether Seltice's success ultimately justified his people's sacrifice of many of their historic traditions and practices."
—Montana

"Laura Woodworth-Ney is to be commended for her authoritatively researched and documented and readily accessible history of the creation of the Coeur d'Alene Indian Reservation of Idaho. . . . In developing her thesis, the author demonstrates a complete mastery of the published sources and, most important, of often obscure unpublished primary sources, ranging from Jesuit records to federal documents. . . . The astute arguments brought forth by Woodworth-Ney and her exemplary archival research also serve as a methodological model that should be emulated by other scholars and can be applied to show how the identities of other Indian communities have come into being."
—The Journal of American History

Mapping Identity traces the formation of the Coeur d'Alene Indian Reservation in northern Idaho from the introduction of the Jesuit notion of "reduction" in the 1840s to the finalization of reservation boundaries in the 1890s. Using Indian Agency records, congressional documents, Bureau of Indian Affairs (BIA) records, Jesuit missionary reports, and tribal accounts, historian Laura Woodworth-Ney argues that the reservation-making process for the Coeur d'Alenes reflected more than just BIA policy objectives. It was also the result of a complex interplay of Jesuit mission goals, the Schitsu'umsh chief Andrew Seltice's assimilationist policy, and political pressure from local non-Indians. Woodworth-Ney concludes that in creating the reservation, BIA officials and tribal leaders mapped boundaries not only of territory, but also of tribal identity.

Mapping Identity builds on the growing body of literature that presents a more complex picture of federal policy, Native identity, and the creation of Indian reservations in the western United States. It will be important to readers interested in western U.S. history, legal and administrative history, Native American history, and interior Northwest history.

Laura Woodworth-Ney is executive vice president and provost and professor of American history at Idaho State University, Pocatello. She has published a number of articles on topics exploring the connections between federal policy, community, and culture in the American West.