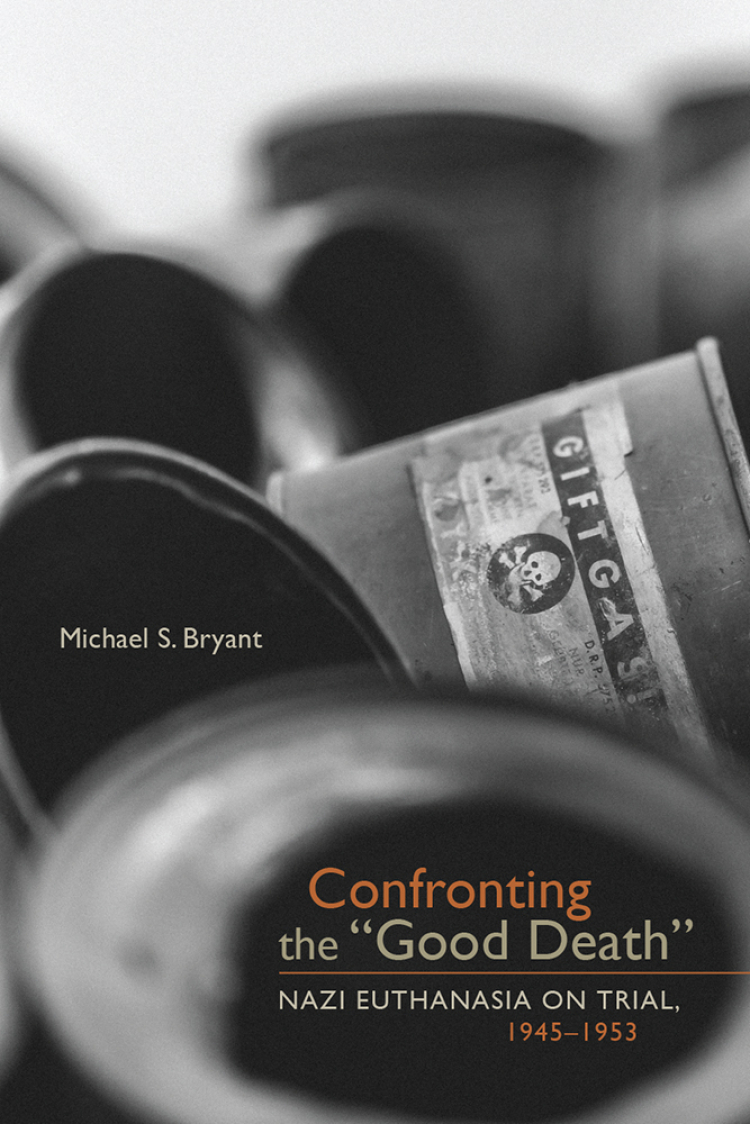 "The scholarship devoted to the complicity of German physicians in the Holocaust is rich and detailed, but there remains, as Michael Bryant demonstrates, still more to learn. It is well established that the techniques employed by the Nazis to exterminate Jews and others in concentration camps were first applied to people in state hospitals who were deemed mentally disabled or terminally ill. What has been less thoroughly investigated is the postwar response of both the Allies and the Germans to these atrocities. Bryant fills the gap with a systematic account of the judicial proceedings against those charged with killing the disabled."
—New England Journal of Medicine

"An important book that deserves a wide readership. Anyone interested in broad issues surrounding the administration of international justice; medical ethics; human rights; tensions between morality, law, and politics; or the ways that societies retrospectively deal with wartime atrocities will find a compelling case study in Bryant's work."
—Lora Knight, H-Net Reviews

"[W]ell researched and lucidly argued. . . by and large free of jargon and speculative psychological mumbo-jumbo about the Germans and their psychological deficiencies. Indeed, his sober reflection on the cases and case documents is as refreshing as his conclusion. . . "
—German Studies Review

"[T]he most comprehensive and nuanced analysis of these trials to date; he outlines not only the history of the trials, but also the legal issues surrounding the prosecution of euthanasia crimes, the history of euthanasia in Germany, and the T-4 program's relationship to the 'Final Solution' during the Second World War. Bryant links these interrelated questions seamlessly, drawing for the reader a clear picture of the contingencies that led eventually to the 'spectacular failure' of the euthanasia trials. . . . [A] masterful work that enriches tremendously the growing body of literature on postwar trials of Nazi perpetrators. Bryant's expert juggling of legal, political, and historical complexities provides the reader with an excellent introduction to the euthanasia program, the Final Solution, early postwar American and West German law, and the ultimate victory of national interests over justice."
—Holocaust & Genocide Studies

"This book makes clear how deliberate, well-organized, and widespread the Nazis' murder of the mentally disabled was, as well as how it served as both precedent and training ground for the Holocaust."
—The Federal Lawyer

"Bryant's book offers a unique series of insights into the post-WWII redefinition of euthanasia, after mercy killing had served the Nazis as a crucial prelude to the gassings of Jews and other groups. The work will be of great use to legal historians and to Holocaust scholars from all fields, as well as to the general public interested in human rights issues."
—Dr. Janet Ward, co-author of German Studies in the Post-Holocaust Age

"With mastery and precision, Bryant dissects the postwar German trials against the 'mercy killers' of Nazism. It's the first truly authoritative work on the subject in the English language."
—Dr. Dick W. De Mildt, co-editor of Nazi Crimes on Trial, Institute of Criminal Law, University of Amsterdam

"A superb book, well and readably written, excellently referenced and woven into a fabric that makes the progression from children's euthanasia through T-4 and ultimately to the holocaust quite plausible as long as we keep in mind that what Hitler meant by euthanasia was simply murder hiding under another name."
—Dr. Erich H. Loewy, author of Textbook of Healthcare Ethics

"Combining the expertise of a historian and a lawyer, Michael Bryant has written a compelling account of how considerations of power and national interest subverted the prosecution of the killers of thousands of helpless persons. Readers will be shaken by Bryant's account of the fragility of justice and the ways in which law can be used to excuse murder."
—Dr. Robert C. Kunath, Associate Professor of History, Illinois College

Years before Hitler unleashed the "Final Solution" to annihilate European Jews, he began a lesser-known campaign to eradicate the mentally ill, which facilitated the gassing and lethal injection of as many as 270,000 people and set a precedent for the mass murder of civilians. In Confronting the "Good Death" Michael Bryant analyzes the U.S. government and West German judiciary's attempt to punish the euthanasia killers after the war.

The first author to address the impact of geopolitics on the courts' representation of Nazi euthanasia, Bryant argues that international power relationships played havoc with the prosecutions.

Drawing on primary sources, this provocative investigation of the Nazi campaign against the mentally ill and the postwar quest for justice will interest general readers and provide critical information for scholars of Holocaust studies, legal history, and human rights.

Support for this publication was generously provided by the Eugene M. Kayden Fund at the University of Colorado.

Michael Bryant is professor of history and legal studies at Bryant University in Rhode Island and has served as a military attorney with the U.S. Air Force. Wives, Mothers, and the Red Menace

Conservative Women and the Crusade against Communism

Coal in Our Veins

Working on the Railroad, Walking in Beauty