Race, Place, and Discrimination in a Costa Rican High School 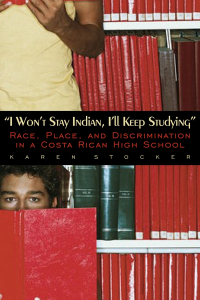 While teaching and researching on an indigenous reservation in Costa Rica, Karen Stocker discovered that for Native students who attended the high school outside the reservation, two extreme reactions existed to the predominantly racist high school environment. While some maintained their indigenous identity and did poorly in school, others succeeded academically, but rejected their Indianness and the reservation. Between these two poles lay a whole host of responses. In "I Won't Stay Indian, I'll Keep Studying," Stocker addresses the institutionalized barriers these students faced and explores the interaction between education and identity.

Stocker reveals how overt and hidden curricula taught ethnic, racial, and gendered identities and how the dominant ideology of the town, present in school, conveyed racist messages to students.

"I Won't Stay Indian, I'll Keep Studying" documents how students from the reservation reacted to, coped with, and resisted discrimination. Considering the students' experiences in the context of the Costa Rican educational system as a whole, Stocker discusses policy shifts that might reduce institutionalized discrimination. Her interpretation of the experiences of these students makes a significant contribution to anthropology, Latin American studies, critical race theory, and educational theory.

Karen Stocker is an assistant professor of anthropology at California State University, Bakersfield.