In Search of York

The Slave Who Went to the Pacific with Lewis and Clark

by Robert B. Betts 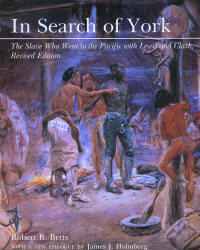 "Robert Bett's biography of York, Clark's black slave who accompanied the Lewis and Clark Expedition, is the finest study ever written about this significant yet elusive member of the Corps of Discovery. . . . The documentary evidence provided by Betts indicates that his contributions to the success of the mission were valuable and significant . . . this book is required reading for any serious student of the Lewis and Clark Expedition."
—Overland Journal

The sole African American member of the Lewis and Clark Expedition, William Clark's enigmatic body servant, York, has inspired numerous myths about his character and exploits. He was supposed to be a man of superb physique and stamina, and some believed that he clowned and womanized his way across the continent and made no significant contributions to the outcome of the Expedition. More often than not, reputable historians have assumed that these myths surrounding him were reliable portrayals of the first black man to reach the Pacific Ocean.

First published in 1985, Robert B. Betts's unique account of this long-obscured historical figure is now back in an updated edition with new material and illustrations. In Search of York removes many of the fallacies surrounding York and pinpoints the important role he played in the success of the Lewis and Clark Expedition. Through painstaking research and the synthesis of all the available information known about York, Betts exposes the impact of racial prejudice on historical interpretation. Neither the hero that a few romantic chroniclers have drawn nor the buffoon of many accounts tainted with racism, Betts's York emerges as a believable human being touching both the heights and depths of the world he lived in.

A significant contribution to Lewis and Clark studies, In Search of York is an invaluable model of historical inquiry for scholars and a fascinating story for all readers.

The late Robert B. Betts graduated from Harvard, was a successful advertising executive in New York City, and regularly contributed to the Lewis and Clark journal We Proceeded On.