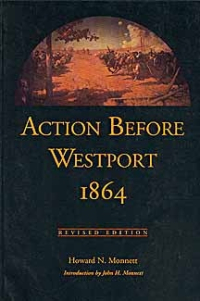 The military events surrounding the frontier village of Westport, Missouri, during the autumn of 1864 were part of a Confederate raid that exceeded any Civil War cavalry raid. The climax of a last-ditch Confederate invasion of Missouri, the battle ended forever the bitter fighting that had devastated the Missouri-Kansas border. First published more than thirty years ago and now available with a new introduction and notes that update the text, Action Before Westport presents the only full account of that most unusual and daring Civil War battle.

In addition to incorporating official records, newspaper accounts, letters, diaries, journals, and privately printed records, Monnett consulted several previously undiscovered manuscripts, two of them the work of key Confederate generals in the raid. The result is a classic work that is both immensely readable and impressive in its documentation.

Howard N. Monnett grew up playing on the battlefield of Westport. A lifelong Kansas City resident, he was dean of faculty and interim chancellor of the Metropolitan Community College of Kansas City.

John M. Monnett, who provides the introduction to this volume, is a professor of history at Metropolitan State College of Denver, author of The Battle of Beecher Island and the Indian War of 1867-1869, and the son of the late Howard H. Monnett.