From Chinese Exclusion to Guanta­namo Bay

Plenary Power and the Prerogative State 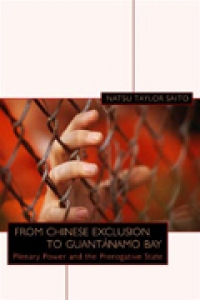 "A brilliant exposition of how absolute power corrupts absolutely, both before and after 9/11, and an eloquent argument for why it is critical that we reclaim principles of equality, democracy, and the rule of law."
—David Cole, author of Enemy Aliens: Double Standards and Constitutional Freedoms in the War on Terrorism

"From Chinese Exclusion to Guantanamo Bay is a critical and timely intervention in the study of the wholesale failure of the U.S. government to comply with the rule of law in the modern 'war on terror.' Professor Saito thoroughly demonstrates how the history of lawless treatment of immigrants and domestic minorities, including the internment of people of Japanese ancestry during World War II, created the foundations for the lawlessness that pervades the recent treatment of Arabs and Musliims in the United States, Afghanistan, Iraq (including Abu Ghraib), and Guantanamo Bay, Cuba."
—Kevin R. Johnson, University of California, Davis

"[O]bserves that people of color are disproportionately affected by repressive actions to preserve America's 'freedom' and 'way of life.' The author advocates respect for rights recognized in the Constitution and in international law that the U.S. has chosen to disregard on the grounds of supposed peril. . . . Saito provides an extensive, well-documented compendium of wrongs perpetrated against outsiders and domestic outcasts in the name of societal safety and well-being."
—Jeffery A. Smith, University of Wisconsin-Milwaukee; Journal of American Ethnic History

"Consistent with US legal scholarship, Saito provides copious citations for her assertions and statements of fact. Her meticulous research and synthesis of primary and secondary sources is commendable, particularly in the service of a challenge to accepted historical interpretations and an analysis that leads to disquieting but urgent conclusions. Readers seeking a thorough, historically grounded analysis of US actions (and court inaction) in the war on terror, and a passionate defense of the rule of law will find Saito's book rewarding."
—Ann M. Lucas, The International History Review

"What gives Saito's critique of plenary power its particular urgency, of course, is what has happened to the country since September 11, 2001. The perpetrators of the attack were Arab, Muslim, and foreign. It was easy to cast those who shared their ethnic and religious identities as, in Saito's term, 'the Other,' whose rights could be abrogated without much recourse."
—Annette Gordon-Reed, The Journal of American History

Continuous expansion of executive power is igniting national debate: Is the administration authorized to detain people without charges or access to counsel, due process, or a fair trial? Is torture acceptable as long as it doesn't happen on U.S. soil? In a new study of the use of plenary power—the doctrine under which U.S. courts have allowed the exercise of U.S. jurisdiction without concomitant constitutional protection—Natsu Taylor Saito puts contemporary policies in historical perspective, illustrating how such extensions of power have been upheld by courts from the 1880s to the present.

From Chinese Exclusion to Guanta­namo Bay also provides a larger context for understanding problems resulting from the exercise of plenary power. Saito explains how the rights of individuals and groups deemed Other by virtue of race or national origin have been violated under both the Constitution and international law. The differing treatment of Jose Padilla and John Walker Lindh—both Americans accused of terrorism—provides an example of such disparate approaches. Such executive actions and their sanction by Congress and the judiciary, Saito argues, undermine not just individual rights but the very foundations of our national security—democracy and the rule of law.

From Chinese Exclusion to Guanta­namo Bay will interest readers concerned with the historical background of constitutional protection in times of war and peace and will provide fascinating new material for scholars, teachers, and students of law, history, and ethnic studies.

Natsu Taylor Saito is an attorney and a professor at Georgia State University’s College of Law in Atlanta.