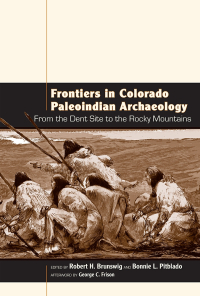 "Everything you might want to know about Paleoindians in Colorado, in great detail. With rich material on environmental reconstructions, the volume will be useful to archaeologists working with paleoclimatological specialists, and those struggling to make something of lithic scatter sites. Summing up: recommended."
—A.B. Kehoe, CHOICE Magazine

"[T]he four chapters on the Dent site contain important new data never published elsewhere. The book contains plenty of new ideas regarding Paleoindian organization in the Colorado Plains and Southern Rocky Mountain. As such, it belongs in the library of those interested in Colorado and Paleoindian archaeology as well as archaeologists interested in interdisciplinary human ecological research."
—Jason M. LaBelle, Great Plains Research

As the Ice Age waned, Clovis hunter-gatherers began to explore and colonize the area now known as Colorado. Their descendants and later Paleoindian migrants spread throughout Colorado's plains and mountains, adapting to diverse landforms and the changing climate. In this new volume, Robert H. Brunswig and Bonnie L. Pitblado assemble experts in archaeology, paleoecology-climatology, and paleofaunal analysis to share new discoveries about these ancient people of Colorado.

The editors introduce the research with scientific context. A review of 75 years of Paleoindian archaeology in Colorado highlights the foundation on which new work builds, and a survey of Colorado's ancient climates and ecologies helps readers understand Paleoindian settlement patterns.

Eight essays discuss archaeological evidence from Plains to high Rocky Mountain sites. The book offers the most thorough analysis to date of Dent—the first Clovis site discovered. Essays on mountain sites show how advances in methodology and technology have allowed scholars to reconstruct settlement patterns and changing lifeways in this challenging environment.

Colorado has been home to key moments in human settlement and in the scientific study of our ancient past. Readers interested in the peopling of the New World as well as those passionate about the methods and history of archaeology will find new material and satisfying overviews in this book.

Robert H. Brunswig is professor emeritus of anthropology and university research fellow at the University of Northern Colorado.

Bonnie L. Pitblado is the Robert and Virginia Bell Endowed Chair and professor of anthropological archaeology at the University of Oklahoma.