The Lienzo de Quauhquechollan, A Nahua Vision of the Conquest of Guatemala 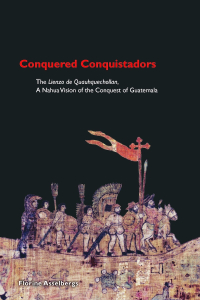 "This book is truly a pathbreaking work. No Mesoamericanist or scholar of the Conquest can afford to be without it."
—The Sixteenth Century Journal

"Asselbergs . . . is the first scholar to identify the map as depicting the Quauhquecholteca invasion of Guatemala and to offer an accurate, detailed, and fully contextualized analysis of the document. Asselberg's book, however, is far more than an art-historical analysis of a single map. Her discussion of the lienzo is so thorough and clearly presented as to make her study possibly the best book yet published on the Spanish (or Spanish-Nahua) conquest of Guatemala."
—Hispanic American Historical Review

"This exellent study is recommended not just for professionals and students, but to those who seek knowledge about the nature of the conquest of the Americas."
—Colonial Latin American Historical Review

In Conquered Conquistadors, Florine Asselbergs reveals that a large pictorial map, the Lienzo de Quauhquechollan, long thought to represent a series of battles in central Mexico, was actually painted in the 1530s by Quauhquecholteca warriors to document their invasion of Guatemala alongside the Spanish and to proclaim themselves as conquistadors. This painting is the oldest known map of Guatemala and a rare document of the experiences of indigenous conquistadors.

The people of the Nahua community of Quauhquechollan (present-day San Martin Huaquechula), in central Mexico, allied with Cortés during the Spanish-Aztec War and were assigned to the Spanish conquistador Jorge de Alvarado. De Alvarado and his allies, including the Quauhquecholteca and thousands of other indigenous warriors, set off for Guatemala in 1527 to start a campaign against the Maya. The few Quauhquecholteca who lived to tell the story recorded their travels and eventual victory on the huge cloth map, the Lienzo de Quauhquechollan.

Conquered Conquistadors, published in a European edition in 2004, overturned conventional views of the European conquest of indigenous cultures. American historians and anthropologists will relish this new edition and Asselbergs's astute analysis, which includes context, interpretation, and comparison with other pictographic accounts of the "Spanish" conquest. 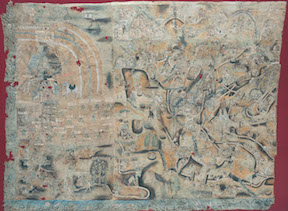 Florine Asselbergs was educated at Leiden University, the Netherlands, specializing in Mesoamerican pictorial manuscripts and history.