Grand Councils and Treaty-Making on the Central Plains 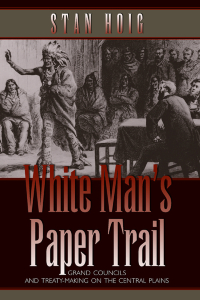 "Stan Hoig's extensive research spans about 40 years and is revealed in more than a dozen books on Indian history. This new effort is among his best. Hoig expertly takes the reader through the procedures of Indian treaties, peace negotiations, or lack of, and points out 'political deception and dishonesty' by various government officials. Hoig's well-founded premise is that treaties were designed specifically for the 'displacement and removal of the Indian people.' The reader will learn of such atrocities during a 75-year period, spanning from the Missisippi River westward. Any serious researcher will gain invaluable insight from Hoig's excellent treatment of the subject."
—True West

"In White Man's Paper Trail Stan Hoig has presented scholars and lay readers with an in-depth investigation of United States treaties with Plains Indian tribes during the nineteenth century. . . . Hoig outlines a trail of deception in the treaty negotiations. . . . Still, this book does not come off as a biting criticism of United States Indian policy. . . . the author has presented a fairly balanced assessment of a controversial issue. Stan Hoig is qualified to undertake such a monumental task as attempting to analyze the treaty process, for he has spent a good portion of his life researching the Great Plains tribes."
—Chronicles of Oklahoma

"Using published materials, newspapers, governmental records, and ethnographic evidence, Hoig weaves a web of treaty councils starting out in the beginning as diplomacy between equals but quickly digressing into a flawed system that usually resulted in broken promises and military intervention. . . . [A]n important contribution to understanding both sides of the diplomatic process."
—Journal of the West

"The book is detailed, soundly organized. . . . It reminds us once again that the treatymaking was largely one-sided in favor of the U.S. government; that Indian leaders were often cajoled, bribed, lied to, and intimidated; that Indian negotiators often understood what was happening to their people and their territory but were helpless to do anything but sign the treaties; and that the U.S. Senate in the ratification process often changed the nature of the treaties, which then led to further difficulties in securing the Indian leaders' acquiescence to the changes."
—New Mexico Historical Review

"This is familiar territory to Stan Hoig, who has written over a dozen books relating to the American West. . . . Hoig's specialty is the carefully crafted synthesis."
—William T. Hagan, Western Historical Quarterly

"Instead of giving us another rendition of how Euro-Americans stole the land, the resources, and the livelihood of American Indian peoples, [Hoig] presents a narrative account of how American Indian peoples attempted to protect their lifeways through diplomacy and creative means. . . . Any Native American library would be incomplete without this book, both because of its scholarship on American Indians and Euro-American relationships in the Plains and its discussion of the U.S. treaty-making process during the nineteenth century."
—H-AmIndian, H-Net Reviews

"The uniqueness of Hoig's narrative is its focus on peacemaking rather than conflict: White Man's Paper Trail is a kind of antihistory of the Indian Wars. The author has consulted a wide range of published, archival, and newspaper sources to build his narrative. He offers a convenient chronological account that will be especially useful for students who are just beginning to engage with this historical era."
—Journal of American History

"For the reader interested in the history of how the United States treated American Indians from 1800-71, Hoig presents a clear picture of many of the events that led to the writing of treaties. . . . [An] essential research tool for students, historians, and history buffs. It should be required reading for Americans who have an interest in American and Indian relations."
—Oklahoman

"With his new publication, Stan Hoig proves once again that he is a master of his subject matter. Readers will feel confident that they are in the competent hands of a reliable scholar who avoids pedantry and polemics and who writes with a clear, eminently readable style."

White Man's Paper Trail presents a poignant history of the U.S. government's attempts to peacefully negotiate treaties with tribes in Arkansas, the Dakotas, Kansas, Oklahoma, Texas, Colorado, and Wyoming. Stan Hoig shows how treaty-making—once considered a viable method of peaceably resolving conflicts—degenerated into a deeply flawed system sullied by political deceptions and broken promises. White Man's Paper Trail illuminates the pivotal role of treaty negotiations in the buildup to the Plains Indian wars, in American Indians' loss of land and self-determination, and in Euro-American westward expansion.

Stan Hoig was professor emeritus at the University of Central Oklahoma, an award-winning journalist, and author of more than twenty books.