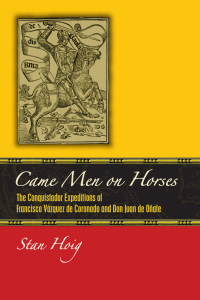 "Hoig tells this story with a sharp eye for human details—sometimes gruesome but nonetheless compelling details—that bring Coronado, Oñate, and other Spanish soldiers and priests alive in ways that I have never read. After examining Hoig's account, I will never see the Spanish entrada or conquest in the same way. . . Parts of this manuscript left me stunned."
—Durwood Ball, University of New Mexico

"Came Men on Horses by Stan Hoig is mesmerizing . . . The unvarnished facts about the entradas of Coronado and Oñate, like those of other conquistadors, force readers to some uncomfortable conclusions about human behavior, its cruelty and an rapaciousness, but there is evidence of human courage, tenacity and the desire for personal enrichment."
—Virginia McConnell Simmons, Colorado Central Magazine

"Hoig gives the reader a virtual treasure trove of historical information in a variety of ways—narrative, research references and illustrations. For early American history buffs, this book is a must, and for the general reader, it offers a deeper look into stories of our early American history. Hoig presents us with a perspective unlike the ones given during our early school years."
—Paul R. Lehman, Sunday Oklahoman

"Recreating the past as lived experience (however unsavory we find the actions and attitudes of those who lived it) is central to historical scholarship, and Hoig manages to bring the conquistadors to life."
—Tom Arne Midtrod, Kansas History

"This relatively small book covers a great scope of history admirably, thanks to Hoig's ability to summarize events clearly and provide broad overviews. It is a welcome addition to Southwest scholarship."
—Jim Turner, The Journal of Arizona History

Guided by myths of golden cities and worldly rewards, policy makers, conquistador leaders, and expeditionary aspirants alike came to the new world in the sixteenth century and left it a changed land. Came Men on Horses follows two conquistadors—Francisco Va­zquez de Coronado and Don Juan de Oñate—on their journey across the southwest.

Driven by their search for gold and silver, both Coronado and Oñate committed atrocious acts of violence against the Native Americans, and fell out of favor with the Spanish monarchy. Examining the legacy of these two conquistadors Hoig attempts to balance their brutal acts and selfish motivations with the historical significance and personal sacrifice of their expeditions. Rich human details and superb storytelling make Came Men on Horses a captivating narrative scholars and general readers alike will appreciate.

Stan Hoig was professor emeritus at the University of Central Oklahoma, an award-winning journalist, and author of more than twenty books.