"We Shall Independent Be" 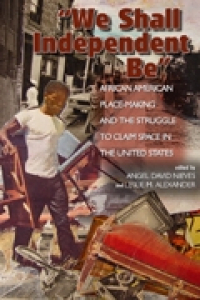 "This is a splendid collection of scholarly essays. . . . Its thematic rather than straightforward chronological approach enables us to fathom certain recurring continuities as well as discontinuities in the African American struggle for terrain in geographical, social, and spiritual terms."
—Professor Joe William Trotter Jr., History Department Head, Carnegie Mellon University

"This is a gem of a book, a clear, intelligent, multi-faceted exploration of the history of African-American search for space in the United States. The time periods covered extend from the early nineteenth century to the present, with an excellent overview of contested spaces in the courtroom, urban neighborhoods, places of worship, the suburbs, and even burial grounds. This is a creative and significant contribution to the study of race and space."

"The many thoughtful, original, and exciting essays in 'We Shall Independent Be' powerfully illuminate the interstices of black history and culture, revealing the myriad ways in which African Americans struggled to claim and develop spaces and places essential to survival and social transformation. This beautiful and moving anthology is essential reading."

—Darlene Clark Hine, author of A Shining Thread of Hope: The History of Black Women in America

With twenty chapters from leading scholars in African American history, urban studies, architecture, women's studies, American studies, and city planning, "We Shall Independent Be" illuminates African Americans' efforts to claim space in American society despite often hostile resistance. As these essays attest, Black self-determination was central to the methods African Americans employed in their quest to establish a sense of permanence and place in the United States.

Contributors define space to include physical, social, and intellectual sites throughout the Northern and Southern regions of the United States, ranging from urban milieus to the suburbs and even to swamps and forests. They explore under-represented locations such as burial grounds, courtrooms, schools, and churches. Moreover, contributors demonstrate how Black consciousness and ideology challenged key concepts of American democracy—such as freedom, justice, citizenship, and equality—establishing African American space in social and intellectual areas.

Ultimately, "We Shall Independent Be" recovers the voices of African American men and women from the antebellum United States through the present and chronicles their quest to assert their right to a place in American society. By identifying, examining, and telling the stories of contested sites, this volume demonstrates the power of African American self-definition and agency in the process of staking a physical and ideological claim to public space.

Angel David Nieves is an assistant professor in the School of Architecture, Planning, and Preservation at the University of Maryland, College Park.

Leslie Alexander is an associate professor of history at the Ohio State University and the author of African or American?