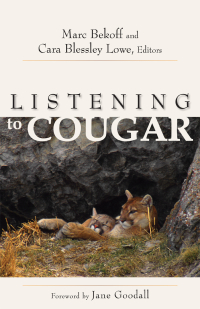 "Listening to Cougar indeed! And hearing, through the voices of some of our finest writers, the echoes of wildness and of fear and of pure joy that say so much about who we are and who we have become."
—Bill McKibben, author The Bill McKibben Reader

"Humans have always been in awe of Puma concolor, the cat of one color, also known as the puma, mountain lion, or cougar. This largest of the small, nonroaring cats used to be found across North America, but human impatience with such a large predator has all but extirpated them from the East and concentrated their numbers in the mountains of the West. People rarely see these elusive cats, but when they do, the encounter is always indelibly etched on the consciousness. Collected here is a series of essays about the cougar, about its effect on the human psyche, about its place in the ecosystem, and about the emotional effect of viewing one. At times mystical, at times poetic, these tales of the meeting of human and cat are evocative of wildness and nature, both of which we all crave on some level."
—Booklist

"Puma. Cougar. Mountain lion. Panther. These words and the creatures they represent inspire awe, wonder, excitement, terror, and reverence in the writers whose contributions make up this anthology. Bekoff (emeritus, ecology and evolutionary biology, Univ. of Colorado; "The Emotional Lives of Animals") and Lowe (cofounder, Cougar Fund) have in a sensitive, factual, and respectful way provided us, through the eyes of others, a glimpse of this magnificent animal. Noted writers and poets like Barry Lopez, Rick Bass, and Gary Gildner share their personal encounters with the big cat, while biologists and conservationists discuss cougar ecology. Hunters, environmental activists, lovers of the outdoors, and Native Americans also offer their insightful perspectives. This well-written and informative volume is highly recommended for all public and academic libraries and natural history collections focusing on animal behavior."
—Library Journal

"[T]alented writers answered the call for this book with fresh material, and it provides a fine meditation on the cougar, including biological, historical, spiritual, and personal perspectives."
—New West.Net

"[An] illuminating new collection . . . there are at least five or six essays that contribute greatly to the growing literature on mountain lion behavior and conservation."
—Tim Hull, Tucson Weekly

"[T]he stories all promote peaceful co-existence by appealing to human tolerance and understanding of what this animal's absence would mean to the ecosystem and to the human soul."
—Sandy Nelson, Santa Fe New Mexican

"[T]he book takes a fascinating look at what these mountain lions are all about, their behaviors, lifestyles, who they attack, why they attack, and when. Captured on its pages are first-hand accounts of people who have run into these cats—almost literally at times. And most interestingly, it takes on the subject of why we as humans tend to fear the mountain lion, and yet would be fascinated to see one. . . . These are stories upon stories here, which take us to that private place where mountain lion meets human; where our two worlds intersect. The book also offers a wealth of fascinating facts about the mystifying creature."
—Crista Martin, Good Times Santa Cruz

"This spellbinding tribute to the Puma concolor honors the big cat's presence on the land and in our psyches."
—YubaNet.com

"From carnivore expert Bekoff to nature writers Rick Bass and Barry Lopez and to poet Gary Gildner, each short contribution leaves the reader with a respect for the animal that contrasts with the coldness of the human attack statistics at the back of the book."
—Conservation Magazine

This spellbinding tribute to Puma concolor honors the big cat's presence on the land and in our psyches. In some essays, the puma appears front and center: a lion leaps over Rick Bass's feet, hurtles off a cliff in front of J. Frank Dobie, gazes at Julia Corbett when she opens her eyes after an outdoor meditation, emerges from the fog close enough for poet Gary Gildner to touch. Marc Bekoff opens his car door for a dog that turns out to be a lion. Other works evoke lions indirectly. Biologists describe aspects of cougar ecology, such as its rugged habitat and how males struggle to claim territory. Conservationists relate the political history of America's greatest cat. Short stories and essays consider lions' significance to people, reflecting on accidental encounters, dreams, Navajo beliefs, guided hunts, and how vital mountain lions are to people as symbols of power and wildness.

Excerpt
BK Loren, in Listening to Cougar: "If the lion, in all its dark, nocturnal otherness, in all its light, internal sameness, does not exist for future generations, if we destroy its habitat, or call open season on it, what could we possibly find to replace it? It is precisely because we fear large predators that we need them. They hold within them so many things that we have lost, or are on the verge of losing, personally and collectively, permanently and forever. If we sacrifice the fear, we also sacrifice the strength, the wildness, the beauty, the awe."

Marc Bekoff has published twenty books, including The Emotional Lives of Animals, and is a professor emeritus of ecology and evolutionary biology at the University of Colorado Boulder.

Writer and photographer Cara Blessley Lowe is author of Spirit of the Rockies and co-founder of The Cougar Fund.