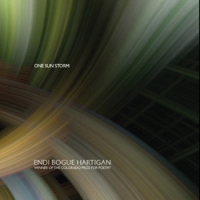 Winner of the 2008 Colorado Prize for Poetry

"Endi Bogue Hartigan's poems are enveloping: one is immersed in experiences of ice drifts, orange peels, and the striving toward a clarity (Let us be clear, one poem reiterates) that crystallizes and then evaporates. Subjects and objects are beautifully combined and confused through repetitions both musical and mysterious; each separate thing helps to form the existence of another. A reader is drawn into a process of thinking—a kind of sifting and sorting—ambitious for the large world that is always beyond one's grasp. One Sun Storm is not a mere collection, but a total project in which each poem is part of the whole. The passing by of the pieces of this created world engenders gratitude and awe."
—Martha Ronk, final judge and author of Vertigo, In a Landscape of Having to Repeat, and Why/Why Not

"Here is a vision of, a vision in, rather than a vision beyond the world, a poetry whose accuracy is humbly undercut by the recognition that the world is always larger than the poem. Here is a poetry whose faith is in something not merely itself. The world is experiential before it is textual. In between those two points, Hartigan's poems do their work, ensuring that what has been seen once, in its singular wonder, remains to be seen again. The page pushes its root down into the world, into the fact of the world, the fact that the world is—and that fact has a sheen, has a music. Hartigan hears that music. She hears it, and she lets the facts sing their terrestrial song."
—Dan Beachy-Quick, author of A Whaler's Dictionary, Mulberry, Spell, and North True South Bright

"More interested in the generative possibilities of questions than in their answers, the well-crafted, rangy free-verse lyrics of Hartigan's Colorado Prize-winning debut obliquely interrogate humanity's relationships with larger forces, both natural and man-made, as well as notions of love and motherhood. . . . Hartigan distinguishes herself from her peers—she shares with many young poets a hip penchant for fragmentation and elliptical imagery—with her careful eye ('Wood chips/ burning/ by the pharmacy'), her ear for the ways soft and sharp sounds make music together ('one leaf from among/ the accumulate of leaves'), and her earnest search for 'One voice rising and falling in one chorus.'"
—Publisher's Weekly

"[I]t finds revelation at the moment of becoming, which occurs and then, just as suddenly, is gone, replaced by another becoming. Hartigan's poems, particularly the sequences, are recombinant organisms, becoming and becoming again, like double helixes evolving into eyes and ears and skin."
—Andy Frazee, VERSE

Endi Bogue Hartigan's work has appeared in Chicago Review, Free Verse, Quarterly West, TinFish, Gulf Coast, New Orleans Review, Insurance, LVNG, The Antioch Review, Northwest Reveiw, as well as other magazines and an anthology. She cofounded and edited Spectaculem, a magazine devoted to long poems and series, for several years. A graduate of Reed College and the University of Iowa Writers' Workshop, Hartigan has lived primarily on the West Coast and in Hawaii, and now works and lives in Portland, Oregon, with her husband and son.