The Sun God and the Savior

The Christianization of the Nahua and Totonac in the Sierra Norte de Puebla, Mexico 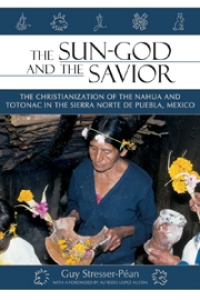 "As an anthropologist, I stand in complete awe of what Stresser-Péan has accomplished in this book. It is classical ethnographic research at its very best. . . . It is truly one of the finest pieces of work I have had the privilege to read, and it is without doubt the result of a lifetime of devotion. I would highly recommend this book not just to anyone interested in the Nahua and Totonac people of the Sierra Norte de Puebla in Mexico or specialists in Latin American Christianity, but to anyone interested in Christian missions, religious syncretism, and folk spirituality. Stresser-Péan has made a lifetime of knowledge available to us, and it is knowledge well worth studying in more depth."
—Robert Danielson, Missiology

The Indians of the Sierra Norte de Puebla are deeply devoted to Christianity, but their devotion is seamlessly combined with pagan customs, resulting in a hybrid belief system that is not wholly indigenous, yet not wholly Christian. The syncretism practiced here has led the Totonac and Nahua people to identify Christ with the Sun God, a belief expressed symbolically in ritual practices such as the Dance of the Voladores.

Spanning the four centuries from the earliest systematic campaign against Nahua ritual practices—Zumárraga's idolatry trials of 1536-1540—to the twentieth century, Stresser-Péan contextualizes Nahua and Totonac ritual practices as a series of responses to Christian evangelization and the social reproduction of traditional ritual practices. The Sun God and the Savior is a monumental work on the ethnographic and historical knowledge of the peoples of the Sierra Norte.

Guy Stresser-Péan did ethnological fieldwork in the Sierra Norte de Puebla since he retired from his official posts in 1970. He wrote six other books in that time and has made seven ethnological documentaries with his wife, Claude Stresser-P̩an.