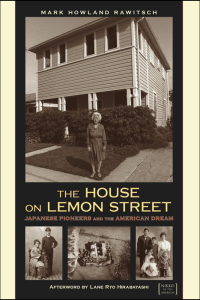 "Mark Rawitsch's The House on Lemon Street ranks with Valerie Matsumoto's Farming the Home Place, Yasuko Takezawa's Breaking the Silence, and Linda Tamura's Nikkei Soldiers Break Their Silence as among the very best books in Japanese American studies to simultaneously make a major contribution to that field of study plus local and public history. What the sterling works by Matsumoto, Takezawa, and Tamura accomplished for Cortez, California; Seattle, Washington; and Hood River, Oregon—to render these sites touchstones of Nikkei history and memory—Rawitsch has done for Riverside, California."
—Art Hansen, Professor Emeritus of History and Asian American Studies, and past director, Center for Oral and Public History at California State University, Fullerton

"Rawitsch teaches that history, the creation of history, and preserving our history occur in our backyard, not in some far-off place."
—Susan Hasegawa, San Diego City College

"[A] highly engaging history of the California Japanese."
—Sandra Dallas, The Denver Post

"Drawing from an excellent selection of primary and secondary sources, Rawitsch recounts Harada's immigration to the US, the subsequent growth of his family, and the family's experiences before, during, and after the evacuation and internment. However, the true value of the book lies in Rawitsch's meticulous research into the legal battle Harada faced over his attempt to purchase a proper home for his children, and his family's struggle for civil rights and acceptance in the town of Riverside."
—J. T. Rasel, Choice

"The House on Lemon Street is an invaluable contribution to Asian American history, specifically for readers interested in the legal proceedings regarding the many racially motivated laws that were directed at specific Asian American ethnic groups . . . Mark Howland Rawitsch does an admirable job of telling the story of a persistent Japanese American man's complex path towards the elusive American Dream. The House on Lemon Street is not just about what defines a house in the eyes of the public, but rather about what constitutes a home in the hearts and minds of each and every one of us. "
—Dean Ryuta Adachi, Amerasia Journal

"Mark Rawitsch has given us a thorough and engaging family biography that contributes to the literature on Japanese Americans and California . . . the book succeeds in its objective: to weave the story of a family and their home—with emotional resonance—into the larger sweep of American history."
—Meredith Oda, Western Historical Quarterly

"The book makes a significant contribution to the historiography of Japanese Americans and to the burgeoning field of object studies that scholars and history aficionados alike will appreciate."
—Kristen Hayashi, The Journal of Asian American Studies

In 1915, Jukichi and Ken Harada purchased a house on Lemon Street in Riverside, California. Close to their restaurant, church, and children's school, the house should have been a safe and healthy family home. Before the purchase, white neighbors objected because of the Haradas' Japanese ancestry, and the California Alien Land Law denied them real-estate ownership because they were not citizens. To bypass the law Mr. Harada bought the house in the names of his three youngest children, who were American-born citizens. Neighbors protested again, and the first Japanese American court test of the California Alien Land Law of 1913—The People of California v. Jukichi Harada—was the result.

Bringing this little-known story to light, The House on Lemon Street details the Haradas' decision to fight for the American dream. Chronicling their experiences from their immigration to the United States through their legal battle over their home, their incarceration during World War II, and their lives after the war, this book tells the story of the family's participation in the struggle for human and civil rights, social justice, property and legal rights, and fair treatment of immigrants in the United States.

The Harada family's quest for acceptance illuminates the deep underpinnings of anti-Asian animus, which set the stage for Executive Order 9066, and recognizes fundamental elements of our nation's anti-immigrant history that continue to shape the American story. It will be worthwhile for anyone interested in the Japanese American experience in the twentieth century, immigration history, public history, and law.

This publication was made possible with the support of Naomi, Kathleen, Ken, and Paul Harada, who donated funds in memory of their father, Harold Shigetaka Harada, honoring his quest for justice and civil rights. Additional support for this publication was also provided, in part, by UCLA's Aratani Endowed Chair as well as Wallace T. Kido, Joel B. Klein, Elizabeth A. Uno, and Rosalind K. Uno.

Mark Rawitsch is Dean of Instruction at Mendocino College and a founding member of the Harada House National Historic Landmark Ad-Hoc Advisory Council of the City of Riverside.