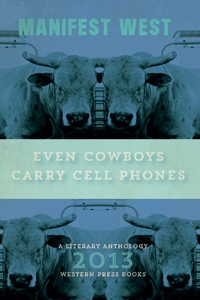 Like any legendary figure, the cowboy is part myth and part reality, memorialized by history and Hollywood, envied by those who spend days at desks and dream of trading swivel chairs for saddles. The writings in this anthology serve as testament to the cultural love, bordering on obsession, of the American cowboy. These works cover the gamut, from the romanticized movie cowboy to ranchers, freelancers, and contemporary wranglers who wear hoodies and work in massive feedlot pens.

The cowboy that emerges from this collection is multifaceted, as the book juxtaposes cowboys spraying longhorns at a car wash to cowboys advertising services on Craigslist and Pepsi-drinking cowboys riding Amtrak trains. There are portraits of the old cowboys, crotchety coffee-swigging men with too many stories about how things were better four decades ago; however, the figure remains one constructed of loyalties—loyalty to work, loyalty to family, loyalty to animals, loyalty to the land.

The image of the cowboy is vivid in our imagination, inseparable from Western mythology, a means to connect ourselves with the wild and rugged individuals we dream we used to be. In this age of computers and cubicles we want to touch and preserve that history, but we must allow for shifting traditions. As the 35 authors in this collection will remind you, even cowboys carry cell phones.