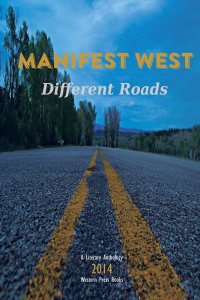 The works in this anthology reflect both the myth and the truth about the part of the United States we call the "West." Is there one "true" West? Or have the changes that are overwhelming most of the rest of the country so modified the West that there is little commonality? The editors of Different Roads believe, with Stephen R. Covey, that our "strength lies in differences, not in similarities" and are constantly amazed by what Stanley Baldwin calls "the many-sidedness of truth." Many sides of the truth of the West are represented in the anthology. Is everything here absolutely the truth? The reader must decide.

Topics included in this collection of poetry, fiction, and creative nonfiction range from the West's diversity of landscape, people, languages, attitudes, and history to discussions of water issues, wildfires, antiquities, and a broad range of environmental concerns. The 2014 theme is Western diversity and the title Different Roads comes from George R.R. Martin's quote, above.