Dress and Regalia in Early Mesoamerica and Central America 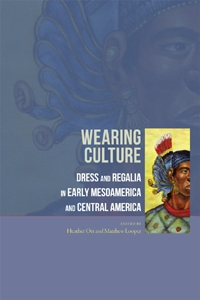 "The papers are engaging and well written and have scholarly dimensions that will significantly impact Formative period studies and beyond. The book's fine organization, methodological approaches, and varied disciplines create a cohesive story."
—Laura M. Amrhein, University of Arkansas at Little Rock

"A valuable resource for scholars and students interested in the costumes, adornments, and body art of the Mesoamerican and Central American Formative period. It contains detailed descriptions of varied data sets, is abundantly and appropriately illustrated, and includes a plethora of useful references for further investigation."
—Journal of Anthropological Research

"The book provides an excellent synthesis of the topic and is well illustrated and rich in detail so that readers can draw their own conclusions."

"[Wearing Culture] succeeds in drawing specific and general​ ​insights despite the challenges of the archaeological​ ​record.​ ​. . . This volume will, of course, be of great value to those​ ​interested in dress, symbol, and ideology. Surprisingly, however,​ ​it might be even more useful to excavators, because​ ​it shows how they could use more fully the evidence from​ ​burials and their ornament sets to better understand aspects​ ​of prehistoric ideologies.​"​

Wearing Culture connects scholars of divergent geographical areas and academic fields-from archaeologists and anthropologists to art historians-to show the significance of articles of regalia and of dressing and ornamenting people and objects among the Formative period cultures of ancient Mesoamerica and Central America.

Focusing on an important period of cultural and artistic development through the lens of costuming and adornment, Wearing Culture will be of interest to scholars of pre-Hispanic and pre-Columbian studies.

Heather Orr is chair and professor of art history in the Department of Art at Western State Colorado University.

Matthew Looper is professor of art history in the Department of Art and Art History at California State University, Chico.