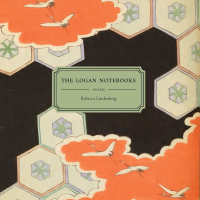 Winner of the 2015 Utah Book Award for Poetry

"The Logan Notebooks has a rough draft feel whilst simultaneously seeming delicately ordered and crafted as a collection. It’s a neat and difficult trick and Lindenberg achieves it via her clever linguistic attunement. Her poetry is casual (notebookesque), but also open to deeper modes of knowing and understanding. . . . The Logan Notebooks is a book lightened by its fervency, by its deceptive buoyancy. To wit, Logan is a town in Utah, near Salt Lake City; per the volume’s back cover, Lindenberg holds a Ph.D. in literature and creative writing from the University of Utah, a school located in Salt Lake City. Lindenberg’s poetry thus adheres to the old adage write what you know. Only she knows what we don’t and as readers our pleasure derives from her willingness to share such enlightenment. "
—The Rumpus

"Despite their beauty, Lindenberg's poems do not shy away from humor or pain, as shown through her students, friends, and lovers. A constant is her fascination with sound and the meaning(s) of words. . . . Lindenberg has crafted a collection that is immediately striking, yet thought-provoking beyond its pages—a recipe to rouse even the most callous reader. "
—Publisher's Weekly

"The Logan Notebooks commits itself to the exploration of whole messy strata of emotion. . . . In smashing the idea of authorial distance, Lindenberg crouches down to us, holds out a hand, and does not shy from her experience. She is alive, wild, warm."
—The Female Gaze

"These poems are intent on calling out the migratory beauty of this world, in a neighbor-voice: friendly, from the yard nearby, pointing out stuff we might not have noticed. They frequently employ that most ancient of forms, the list, to show us what we shine a light on, what we look past, what we reflect, what we miss. In that way, they speak like the meadowlark who says, See you! See you! These poems are for when we shall no longer fear the ecstatic, because we?ll know that ecstasy too is quotidian, as daily as a meadowlark's shopping list."
—Eleni Sikelianos

"In her second collection, Rebecca Lindenberg turns her scrutiny to the American West without forgetting the many layers of sediment and memory there and in other elsewheres. From grocery stores in Utah to a synagogue in Rome to cloud-gazing everywhere, in poems at turns laconic and lush, wistful and wry, Lindenberg shows how beauty and absurdity can and will persist—even, or especially—in the loss of our multiple loves and multiple selves."
—Tarfia Faizullah

"Recursive and elliptical, the poems in Rebecca Lindenberg's The Logan Notebooks are as difficult to depict as they are to forget. Like clouds (themselves, so omnipresent and imperative that Lindenberg confronts them on the first page), these poems shift, then settle into shape, then shift once again. More usual iterations of poetry give way to paragraphs of unimpeachable prose, itemized narratives in which whole, epic plots are cached. Lists run left to right as if they actually listed, like boats off-ballast or stand-alone willows in windstorms. Catalogues are first climactic then cathartic. What she does not write, she has somehow written. Aphorisms become offerings. Almost every line is a sutra. If 'anyone who feels they have to lie' is a thing that has lost its power, then Rebecca Lindenberg need not worry. Neither these poems nor the poet who conceives them flinches at gut-punch truth."
—Jill Alexander Essbaum

"The American West, in its mythical and real-time complexity, is 'itched out of reverie' and 'brought into the deep groove of the present' in Rebecca Lindenberg's The Logan Notebooks. The grotesquerie of capitalism hangs in the background, sometimes the foreground, but her lines don't flinch as they 'attend to these/details that might later/divert you.' Above all this is a book about relationships—to a beloved, a family, a landscape, a country, and language itself. 'Somewhere between the sayable and the unsayable,' Lindenberg's poems startle life from a fractured world. The Logan Notebooks is a balm and an anomaly."
—Joseph Massey

"How do we remain the same person when our bodies, like everything around us, constantly change? I was reminded of these preoccupations while reading Rebecca Lindenberg’s excellent poetry collection The Logan Notebooks. . . . Lindenberg’s collection is redolent of change, of the changing nature of the world around us, of our relationships to this world and those around us, to our changing identities and the fluidity of language."
—15 Bytes

"In The Logan Notebooks, Rebecca Lindenberg offers poems of careful observation, colored by the particular beauties and idiosyncrasies of the town in Utah where the book is set. . . . Her poems also approach the sublime as in 'On a Visit to Nancy Holt’s Sun Tunnels,' in which the winter solstice offers a sight 'Worth the pain in your hand-joints you can only feel in this kind of cold.' In either case, the poems are sensitive to beauty wherever it might be found."

Clouds, mountains, flowering trees. Difficult things. Things lost by being photographed. Things that have lost their power. Things found in a rural grocery store. These are some of the lists, poems, prose poems, and lyric anecdotes compiled in The Logan Notebooks, a remix and a reimagining of The Pillow Book of Sei Shonagon, a collection of intimate and imaginative observations about place—a real place, an interior landscape—and identity, at the intersection of the human with the world, and the language we have (and do not yet have) for perceiving it.

Rebecca Lindenberg is the author of Love, an Index and the recipient of an Amy Lowell Fellowship, a National Endowment for the Arts Literature Grant, and residencies from the Fine Arts Work Center at Provincetown and the MacDowell Arts Colony. She holds a PhD in literature and creative writing from the University of Utah.