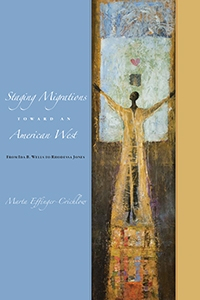 "Staging Migrations toward an American West fills a void in the scholarship of African American history, American history in general, women's history, feminist criticism, and performance theory. While most migration scholarship in these fields has focused on the 'Great Migration' of Black Americans moving from rural, Jim Crow south to northern industrial cities such as New York, Chicago, Pittsburgh, and Detroit, Effinger-Crichlow illuminates a westward migration that has been comparatively ignored."
—Judith Stephens-Lorenz, Pennsylvania State University

​"With exhaustive scholarly and archival research, site visits, personal interviews, and the establishing of an archive of narratives, Marta Effinger-Crichlow’s Staging Migrations Toward an American West examines how Black women’s on- and off-stage performances—as part of their western migrations—shape tales of personal and sociopolitical journeys toward freedom.​ ​. . . The unique theories and criticisms Effinger-Crichlow deploys will also make this book an invaluable resource for theatre and performance theorists and practitioners, feminist theorists, African American historians, and wider anthropological and ethnographic scholars.​"​

"[R]eaders looking for an intersectionality-influenced,​ ​history-based way of thinking about migration​ ​as a ​'performance​' of everyday life—especially​ ​in the lives of black women—will find this a​ ​wonderful text to incorporate into their library.​"​

Staging Migrations toward an American West examines how black women's theatrical and everyday performances of migration toward the American West expose the complexities of their struggles for sociopolitical emancipation. While migration is often viewed as merely a physical process, Effinger-Crichlow expands the concept to include a series of symbolic internal journeys within confined and unconfined spaces.

This interdisciplinary study expands the understanding of the African American struggle for unconstrained movement and full citizenship in the United States and will interest students and scholars of American and African American history, women and gender studies, theater, and performance theory.

Media
Discussion of the book on Conversations with Selwyn.
Interview with The Network Journal as one of their 2014 "25 Influential Black Women in Business" Achievement Awards.
Interview with CUNY Radio.
Marta Effinger-Crichlow was the featured guest speaker at the African Burial Ground National Monument's annual Juneteenth Celebration in 2015. Juneteenth, also known as Freedom Day or Emancipation Day, is the oldest known celebration commemorating the ending of slavery in the United States. For more details, check out her facebook page.

TEDx talk, "Migration and Our Search for Place"