An Ethnohistorical and Archaeological Perspective 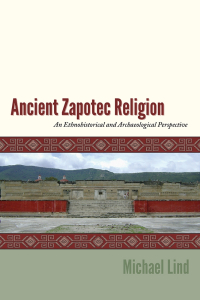 “An excellent, impressive piece of scholarship . . . a valuable resource for scholars and students alike.”
—Sarah B. Barber, University of Central Florida

“As many scholars of Oaxaca and of ancient Mesoamerican religion in general know, there is a paucity of literature on Zapotec religion when compared to what is known about the Maya and Nahua belief systems. Lind’s project is thus timely and offers new insights into this little known area of ancient Zapotec society."
—Hilary M. Leathem, Anthropology News

"Ancient Zapotec Religion is an authoritatively researched study and provides a very useful synthesis of a complex subject. . . . Scholars of Mesoamerican religions will find [it] a valuable addition to the scholarly literature."
—Sixteenth Century Journal

"Lind provocatively points to the still understudied, complex and multi-locational realities of religious organization, structure and infrastructural elements of the ancient Zapotec world. Indeed, as the book progresses, the complexity inherent to the world of Zapotec deities is increasingly made known."
—Naomi Calnitsky, Anthropology News

Ancient Zapotec Religion is the first comprehensive study of Zapotec religion as it existed in the southern Mexican state of Oaxaca on the eve of the Spanish Conquest. Author Michael Lind brings a new perspective, focusing not on underlying theological principles but on the material and spatial expressions of religious practice.

Using sixteenth- and seventeenth-century Spanish colonial documents and archaeological findings related to the time period leading up to the Spanish Conquest, he presents new information on deities, ancestor worship and sacred bundles, the Zapotec cosmos, the priesthood, religious ceremonies and rituals, the nature of temples, the distinctive features of the sacred and solar calendars, and the religious significance of the murals of Mitla—the most sacred and holy center. He also shows how Zapotec religion served to integrate Zapotec city-state structure throughout the valley of Oaxaca, neighboring mountain regions, and the Isthmus of Tehuantepec.

Ancient Zapotec Religion is the first in-depth and interdisciplinary book on the Zapotecs and their religious practices and will be of great interest to archaeologists, epigraphers, historians, and specialists in Native American, Latin American, and religious studies.

Michael Lind was an anthropology professor at Santa Ana College in the 1970s and at the Universidad de las Américas in Mexico in the early 1980s. In 1984 he became a bilingual science teacher in the Santa Ana Unified School District, where he remained until his retirement in 2004. He is coauthor of The Lords of Lambityeco and author of Ancient Zapotec Religion.