edited by Zachary A. Smith and John Freemuth 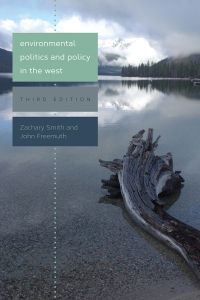 Population growth, industrial development, and renewed resource extraction have put the wide-open spaces and natural resources that define the West under immense stress. Vested interests clash and come to terms over embattled resources such as water, minerals, and even open space. The federal government controls 40 to 80 percent of the land base in many western states, so its sway over the future of the West’s communities and environments has prompted the development of unique policies and politics.

In the third edition of Environmental Politics and Policy in the West, Zachary A. Smith and John Freemuth bring together a roster of top scholars to explicate the key issues involved. The volume has been completely updated to cover rapidly changing developments in the West, including climate change, land management politics and policy, science controversies, western water and river restoration, tribal sovereignty issues, the management of endangered species, and renewable energy development. Contributors also address how bureaucracy and politics shape environmental dialogues and explore multifaceted issues such as the politics of dam removal and restoration, wildlife resource concerns, suburban sprawl and smart growth, the management of renewable resources, public land reform and science, tribal sovereignty and energy, and the allocation of the West’s tightly limited water resources.