"The Touch of Civilization" 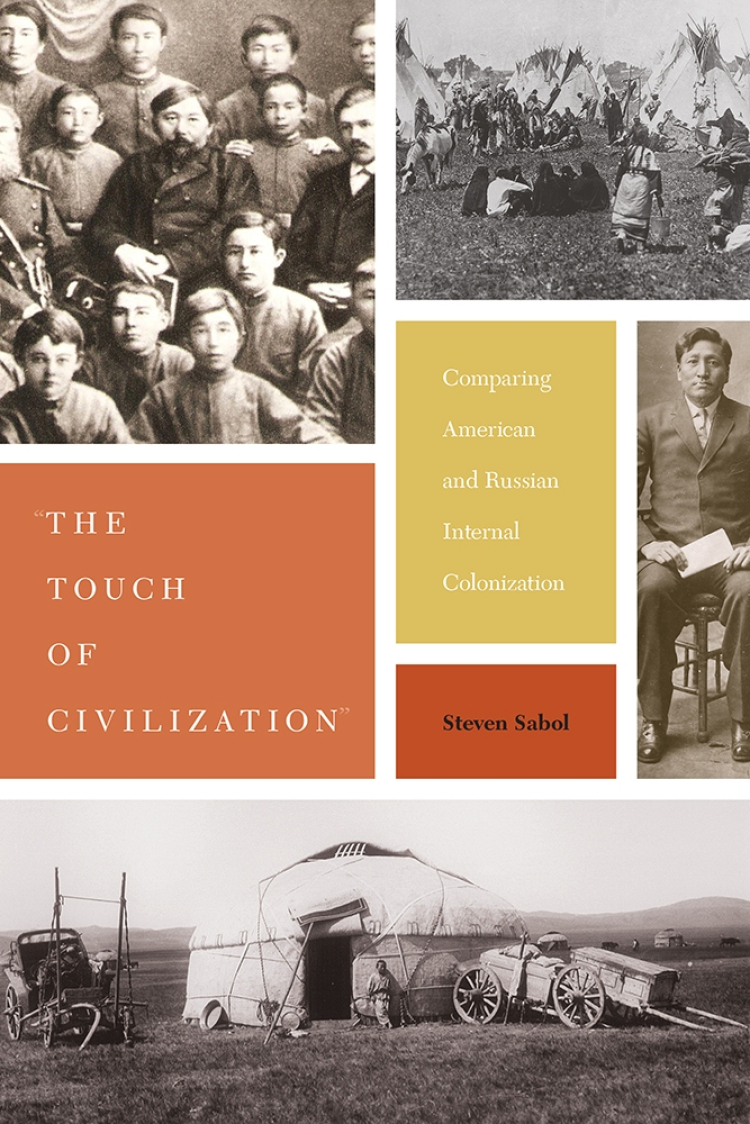 Paperback Price $27.95
Ebook Price Open Access
Buy Now
Choice Outstanding Academic Title, 2017
"An important contribution to western American and Native American history, to Russian and Kazakh history, and to comparative frontiers and borders, and empire and colonization studies. . . . [Sabol] provides one of the clearer and more probing analyses of a range of questions relating to themes of empire and exceptionalism in the history and heritage of both expanding countries."

"[A] remarkable study . . . . Sabol demonstrates how comparative history should be performed. In doing so, he properly places US history in a world context while also expanding understanding of Russian methods and the interconnectiveness of the US and Russian governments' plans for internal colonization. As a work that is inventive in approach and noteworthy in scholarship, one can only hope that other scholars will take up the precedent set by Sabol. Summing Up: Essential."

"[Sabol] ultimately leads to important larger conclusions about the nature of colonization. . . . an important addition to the growing canon on global and comparative histories of the nineteenth-century world."

"Sabol’s comparative study is a pioneering effort that will be of great benefit and inspiration to scholars of Russian, American, and colonial history for years to come."
—Russian Review

"This fascinating book. . . . challenge[s] decisively notions of American and Russian "exceptionalism" and to locate the "internal colonization" of their contiguous continental states. . . . Sabol's book merits wide readership among specialists on both the Great Plains and the steppes and sets a high standard for future comparative and transnational studies of the two grasslands."
—Great Plains Quarterly

"This book contributes to a growing history of global colonialism and imperialism. . . . [and] offers an innovative and well-researched addition to colonial literature. The author should be congratulated for taking on and carrying out an ambitious and revealing comparative study."
—Pacific Northwest Quarterly

“An illuminating book.”
—The Journal of American History

“Sabol’s study stands as an excellent example of the historical lens of settler colonialism. . .  a comparative history that leads to compelling conclusions while fully embracing the historical differences between the two cases, which in itself is a significant accomplishment.”
—American Historical Review

"The Touch of Civilization" is a comparative history of the United States and Russia during their efforts to colonize and assimilate two indigenous groups of people within their national borders: the Sioux of the Great Plains and the Kazakhs of the Eurasian Steppe. In the revealing juxtaposition of these two cases author Steven Sabol elucidates previously unexplored connections between the state building and colonizing projects these powers pursued in the nineteenth century.

This critical examination of internal colonization—a form of contiguous continental expansion, imperialism, and colonialism that incorporated indigenous lands and peoples—draws a corollary between the westward-moving American pioneer and the eastward-moving Russian peasant. Sabol examines how and why perceptions of the Sioux and Kazakhs as ostensibly uncivilized peoples and the Northern Plains and the Kazakh Steppe as "uninhabited" regions that ought to be settled reinforced American and Russian government sedentarization policies and land allotment programs. In addition, he illustrates how both countries encountered problems and conflicts with local populations while pursuing their national missions of colonization, comparing the various forms of Sioux and Kazakh martial, political, social, and cultural resistance evident throughout the nineteenth century.

Presenting a nuanced, in-depth history and contextualizing US and Russian colonialism in a global framework, "The Touch of Civilization" will be of significant value to students and scholars of Russian history, American and Native American history, and the history of colonization.

Steven Sabol is professor of history at the University of North Carolina at Charlotte. He is the former editor of Nationalities Papers and First World War Studies, a recipient of the Arrell M. Gibson Award, and author of Russian Colonization and the Genesis of Kazak National Consciousness. New Mexico and the Pimería Alta

The Colonial Period in the American Southwest