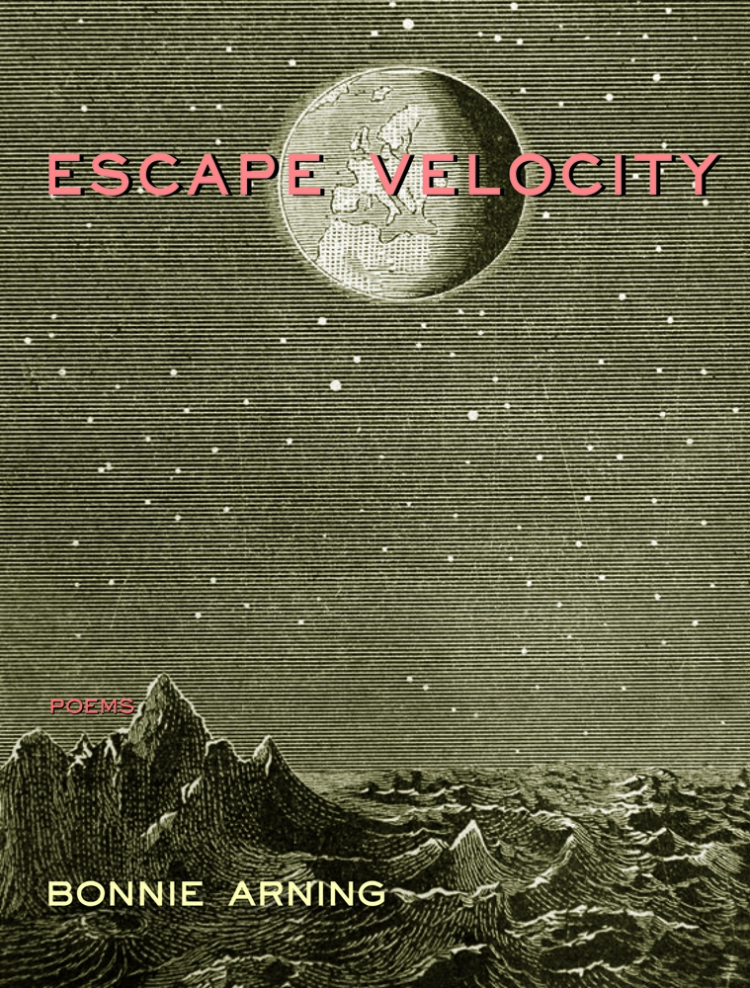 "The cosmos drifts through the ink-dark background of Escape Velocity like a ghost, at once faint and incendiary. In the foreground, all the beautiful and dangerous elements of a woman’s life burn white-hot: marriage, restraining orders, addiction, silence, motherhood, and a landscape spreading out forever in every direction. The intersection of the astral and domestic—the ineffable and the witnessed—and the relentlessness and invention of Arning’s writing give us the best of what lyric poetry has to offer."
—Michael McGriff

"'You / have a heart that was made to shrink / tremendously. Now burst,' Bonnie Arning commands in Escape Velocity, her debut collection of poems that explore, in heartbreakingly staggering images and explosive actions, the tumultuous ways we risk destroying each other in service of that blood-pumping muscle. The intricacies of simultaneously satisfying and disrupting the familial roles we take for granted every day. Make no mistake: these are poems about blood. About sex. About the ‘frequency a man will dash himself upon / the rocks. My body, the magnet he desires collision against.’ Here is a new voice in poetry we won’t soon forget."
—Gary Jackson

"Confessional poetry is a historical moment that is over, but here is a fierce, intelligent, deliberate heir to its most evocative gestures. Here is an emergent narrative about love and domestic violence and grief and change, full of fearsome sympathy with the natural world and always burning: the burn of a cigarette on a forearm, the way shame burns, the burning down of what took such effort to build, the fires of renewal, and the stars of the cold cosmos of fate that burn with a heat we will never feel. But never—and here is where Bonnie Arning departs from her predecessors—never self-pity. What persists above all in this collection is the urgent necessity of language, thrilling in its originality, witty turn-of-phrase, or most keenly observed gesture of erasure followed by something so intuitive as to feel like the bravest of intuitions."

"Make no mistake: this poet is sure to be one of America’s most well-known poets, and soon. Through Escape Velocity, Arning gives us poems that find brilliance in dark matter, with words that hold more gravity than stars."
—The Pleiades Book Review

From the moment of a marriage’s heated inception to its period of luminous crowding and onward into distance and darkness, Bonnie Arning’s Escape Velocity asks if it’s possible to exist outside the only universe we’ve ever known. In modes both lyric and narrative, we are given a peephole into the height and decline of a marriage that begins beneath the moving lights of Las Vegas, Nevada, and traverses the devastating terrain of gambling, miscarriage, infidelity, and violence.

Arning gives voice to divergent aspects of love and violence through her use of math problems, erasures, dictionary entries, structured stanzas, and sprawling free verse. This multiplicity of forms comes together to explore everything from pop culture references of domestic violence to cultural notions of victims and victimhood. However dark, collectively these poems tell a love story—an acceptance of our capability to love those who hurt us, but also the love-of-self required to slowly and steadily reach "the velocity to be everleaving."

In the tradition of Eavan Boland and Louise Glück, Arning wrestles down and examines the terrible without flinching. We journey with her, engrossed by each difficult truth: a precipice near which we are both terrified to stand and transfixed by its unnerving insistence on beauty.

Bonnie Arning is a poet from Albuquerque, New Mexico. She earned her MFA from the University of New Mexico. Her work has appeared in Colorado Review, Prairie Schooner, Cream City Review, and others. Currently, she teaches English and ESOL in Corvallis, Oregon.