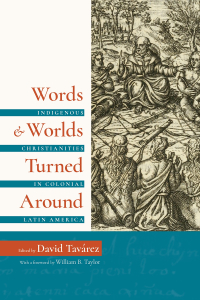 foreword by William B. Taylor

“As pathbreaking and revisionist as what Robert Ricard advocated some eighty years ago. . . . A most welcome addition to the ethnohistory of colonial Latin America. Most valuable is its originality and the exacting level of scholarship necessary to generate such important studies.”

“An intriguing assembly of cross-disciplinary investigations, exploring from different angles the ways in which indigenous Christianities emerged and proliferated in Spanish America. This volume raises big questions for the study of some purportedly old processes and breathes new life into the art of historical interpretation.”

"These [essays] help show what happened on some of the most daunting frontiers of cultural exchange, where distinctive forms of Catholicism emerged. Creative misunderstandings, tense collaborations, fruitful contention: every type of encounter is represented here, with vivid evocations."

"This book is part of an important moment in the historiography of colonial Latin America. . . . [and represents] the cutting-edge research that is redefining the study of indigenous religions of the Americas and their relationship to Christianity."
—Reading Religion

“This volume of essays is recommended for all scholars and students of religion and indigenous peoples of the Americas.”
—International Journal of Latin American Religion

"Together, this volume’s chapters highlight the variety of Catholicisms presented to the Indigenous populations of Latin America and how Native peoples localized Christianity and remade it according to their own cultural logic. . . . Summing Up: Recommended."
—Choice

"Each chapter illustrates innovative approaches that challenge the narrow perception of a one-way "spiritual conquest," engaging the reader with the complexities of translating (converting) Christianity into a new (geo-graphical) context."
—Latin American Antiquity

"The work’s geographic breadth, the rich array of sources introduced by contributors, and several strong and novel analyses make this an important contribution to a dynamic field of study."
—Ethnohistory

"This volume is a significant contribution to colonial scholarship."
—Journal of Latin American Theology

A sophisticated, state-of-the-art study of the remaking of Christianity by indigenous societies, Words and Worlds Turned Around reveals the manifold transformations of Christian discourses in the colonial Americas. The book surveys how Christian messages were rendered in indigenous languages; explores what was added, transformed, or glossed over; and ends with an epilogue about contemporary Nahuatl Christianities.

In eleven case studies drawn from eight Amerindian languages—Nahuatl, Northern and Valley Zapotec, Quechua, Yucatec Maya, K'iche' Maya, Q'eqchi' Maya, and Tupi—the authors address Christian texts and traditions that were repeatedly changed through translation—a process of “turning around” as conveyed in Classical Nahuatl. Through an examination of how Christian terms and practices were made, remade, and negotiated by both missionaries and native authors and audiences, the volume shows the conversion of indigenous peoples as an ongoing process influenced by what native societies sought, understood, or accepted.

The volume features a rapprochement of methodologies and assumptions employed in history, anthropology, and religion and combines the acuity of of methodologies drawn from philology and historical linguistics with the contextualizing force of the ethnohistory and social history of Spanish and Portuguese America.

David Tavárez is professor of anthropology at Vassar College, and a doctoral advisor at the PhD Program in Mesoamerican Studies at UNAM (Mexico). He is the author of The Invisible War: Indigenous Devotions, Discipline, and Dissent in Colonial Mexico, and a coauthor of Painted Words: Nahua Catholicism, Politics, and Memory in the Atzaqualco Pictorial Catechism (with Elizabeth Boone and Louise Burkhart), and of Chimalpahin’s Conquest: A Nahua Historian’s Rewriting of Francisco López de Gómara’s La conquista de México (with Susan Schroeder, Anne Cruz, and Cristián Roa). He has also published more than forty peer-reviewed articles and chapters on Mesoamerican religion and colonial Latin American history. A recent recipient of a Guggenheim Fellowship, his research has also been supported by grants from the NEH, the NSF, the Mellon Foundation, and the John Carter Brown Library.