The Once and Future Silver Queen of the Rockies

Georgetown, Colorado, and the Fight for Survival into the Twentieth Century

by Christine Bradley and Duane A. Smith 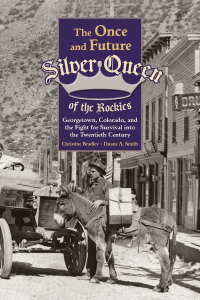 "Smith and Bradley, in a well-written account, provide us with the positive story of the reinvention and ultimate success of a quaint little town."
—Colorado Book Review

There are many studies of local communities during their heydays, but the life of a community in decline is rarely studied. The Once and Future Silver Queen of the Rockies delves into the life of Georgetown, Colorado, after the turn of the twentieth century as mining in Clear Creek County steadily declined and ultimately collapsed.

One of the earliest mining communities in the state, Georgetown began to struggle for survival as the nineteenth century drew to a close. The price of silver dropped precipitously while other mining camps were still opening around the region. The new, bright future once envisioned for the “Silver Queen of the Rockies” began to fade. Yet the community managed to survive and re-create itself in the new world of the twentieth century. Tourism, skiing, and historic preservation replaced mineral extraction as the basis of the regional economy. Today, Georgetown maintains the aesthetic feel of a nineteenth-century mining town and stands as an example of community-supported historic preservation.

This richly illustrated sequel to The Rise of the Silver Queen tells the compelling story of Georgetown’s survival, and ultimate flourishing, after the loss of its principal industry. It is an interesting and engaging addition to the history of Colorado and the West.