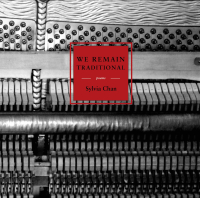 “Sometimes, what I hear, I believe.” Sylvia Chan’s We Remain Traditional is a score of sound upon breakwater. Commanding and sifting through language the way a musician harnesses emotion and craft into playing an instrument and bellowing, Chan produces documentation of music in the travels and revels of everyday life: “my history gets lost in a war” turntables with “I wonder which pop icon will outspeak the other.” Music as the migration of sound is multiplied present tense: “what’s cleft is an introspective singer knowing how feet feel,” and “my mother’s Singer, a final sales item from Sears.” Chan chooses, names—in lyrics broken and pieced by time, practice, Adam, and Chinese/American histories—how music is a patterned force of many moments stacked, moving forward, and pulling back."
—Janice Lobo Sapigao

An intimate monologue-song, Sylvia Chan’s We Remain Traditional manages to bring together the desiring/devastated body and colonialism, a country’s war and a household violence, Canton and Berlin and Oakland, as it explores how the broken self is knit, how it is made and re-made, how “breaking a counter- / point can only be understood / by those who have known ruin.” In this place of history and poetry, “where we observe / each other,” everyday textures like meat sinews stuck in teeth are measured alongside gender and racial politics, intertextual encounters, and a musician’s improvisations, until we the listeners find ourselves vibrating underneath a powerful and unsettling journey of voice, where, indeed, “each musical articulation / remains a call and response.”
—Jennifer S. Cheng

“Sylvia Chan’s We Remain Traditional is anything but that. It is a nervy, saturated tale told with improvisational fervor—richly personal but crosscut by history and culture: “part waltz, part bitter / lawless beauty.” There are inter-leavings of politics, race, music, amor, all in the service of a young woman’s traversal of memory and wakefulness. The verse is as bravely set as the “story” is, with a freedom that feels inevitable: fragmented, dispersed, yet held together by a sinewy poetic logic. The body of this text is a lived one; so, too, it opens into life.”
—Aaron Shurin

"At times, I was reminded of Dawn Lundy Martin's Discipline, for its awareness of the body as a site of colonization and control, and the way trauma is absorbed, re-lived, and re-enacted. . . .The poem becomes a social site where a range of voices, classical and contemporary, are set in dialogue with one another. Call it a community."
—Green Linden Press

In We Remain Traditional, Sylvia Chan juxtaposes the elegy, the conflict, and the brashness of a relationship that summons wild musicality in its love and frustration. Through the speaker and Adam, the beloveds offer thirty-two consolations for the gendered history of Chinese American women—a break and affirmation of their traditions. What saves these two characters is their music—a peace treaty for the book’s form or “fractured paradise,” a language that protects and protests their bodies in Oakland, California.

Marked by vulnerability and intimacy, Chan interrogates a young woman’s childhood sexual abuse. In the vein of Stacy Doris and Paul Celan, Chan asks, because she is a child of violent tradition, what is her visceral grief? This is a speaker who aspires to create universal experiences for her listeners, to transform jazz into narrative. This is a wild, beautiful, and ambitious first book: Chan refuses to apologize for the terror in her conviction and compassion. To choose a man who is behind her sexual, psychological, and political exploitation is to forgive his narcissism, aggression, and addiction. To love, simply, is to live unafraid of pushing boundaries and being happy.

Sylvia Chan is a poet from Hayward, California. Formerly a jazz pianist in the San Francisco East Bay, she lives in Tucson, where she teaches at the University of Arizona, serves as nonfiction editor for Entropy, and is a court advocate for foster kids in Pima County.