Interaction and Connectivity in the Greater Southwest 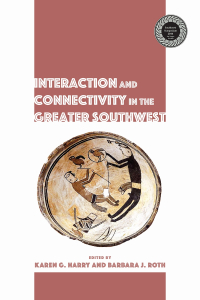 “An excellent collection that will have something of relevance to all Southwestern and Great Basin archaeologists as well as researchers working in other areas.”
—Jeffrey R. Ferguson, University of Missouri

The book observes social interactions’ role in the diffusion of ideas and material culture; the way different social units, especially households, interacted within and between communities; and the importance of interaction and interconnectivity in understanding the archaeology of the Southwest’s northern periphery. Chapters demonstrate a movement away from strictly economic-driven models of social connectivity and interaction and illustrate that members of social groups lived in dynamic situations that did not always have clear-cut and unwavering boundaries. Social connectivity and interaction were often fluid, changing over time.

Interaction and Connectivity in the Greater Southwest is an impressive collection of established and up-and-coming Southwestern archaeologists collaborating to strengthen the theoretical underpinnings of the discipline. It will be of interest to professional and academic archaeologists, as well as researchers with interests in diffusion, identity, cultural transmission, borders, large-scale interaction, or social organization.

Karen G. Harry is professor in the Department of Anthropology at the University of Nevada, Las Vegas. She has authored or coauthored two books and regularly publishes in peer-reviewed books and journals. Her ongoing field research focuses on Virgin Branch Puebloan settlements on the north rim of the Grand Canyon.

Barbara J. Roth is professor and chair of the Department of Anthropology at University of Nevada, Las Vegas. She is the author of Agricultural Beginnings in the American Southwest, coeditor of five edited volumes, and author of numerous peer-reviewed journal articles and book chapters. Her research addresses the changes in household and community organization in the Mimbres region of southwestern New Mexico.