Religion, History, and Place in the Origin of Settled Life 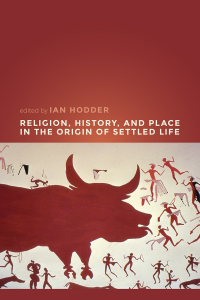 “This volume is a great journey through the Near Eastern Neolithic period.”
—Journal of Eastern Mediterranean Archaeology and Heritage Studies

"The contributions in this important volume provide valuable new insights into the complexity of Neolithic society."
—Journal of Anthropological Research

"A good read for those wanting a deep study of the Neolithic Near East and the latest technological assets being utilized in archaeology."
—Reading Religion

This volume explores the role of religion and ritual in the origin of settled life in the Middle East, focusing on the repetitive construction of houses or cult buildings in the same place. Prominent archaeologists, anthropologists, and scholars of religion working at several of the region’s most important sites—such as Çatalhöyük, Göbekli Tepe, Körtik Tepe, and Aşıklı Höyük—contend that religious factors significantly affected the timing and stability of settled economic structures.

Contributors argue that the long-term social relationships characteristic of delayed-return agricultural systems must be based on historical ties to place and to ancestors. They define different forms of history-making, including nondiscursive routinized practices as well as commemorative memorialization. They consider the timing in the Neolithic of an emerging concern with history-making in place in relation to the adoption of farming and settled life in regional sequences. They explore whether such correlations indicate the causal processes in which history-making, ritual practices, agricultural intensification, population increase, and social competition all played a role.

Religion, History, and Place in the Origin of Settled Life takes a major step forward in understanding the adoption of farming and a settled way of life in the Middle East by foregrounding the roles of history-making and religious ritual. This work is relevant to students and scholars of Near Eastern archaeology, as well as those interested in the origins of agriculture and social complexity or the social role of religion in the past.

Ian Hodder is the Dunlevie Family Professor in the Department of Anthropology at Stanford University. His previous books include Entangled: An Archaeology of the Relationships between Humans and Things and The Leopard’s Tale: Revealing the Mysteries of Çatalhöyük.