A Study in Cultural Change 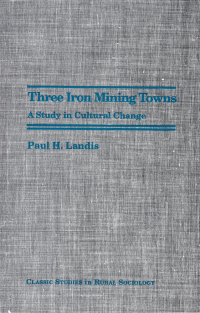 Originally published in 1938, Three Iron Mining Towns by Paul H. Landis is one of the first books republished by the Social Ecological Press in 1997 in order to maintain its distribution. The Social Ecological Press edition includes a forward by Dr. William R. Freudenburg and Dr. Robert Gramling that outlines the importance of this "sweeping analysis of an important set of resource-dependent communities." This book, which was truly ahead of its time in examining the relationship between human activities and the physical environment, is now considered a landmark in Natural Resource Sociology. This clear, well written, jargon-free comparative analysis remains a refreshing reminder of the rich legacy of natural resource social science.

Paul Henry Landis was an American sociologist who joined the faculty at Washington State University in 1935. His work on Minnesota's Iron Range, preserved in the seminal Three Iron Mining Towns, is one of the earliest and most influential examinations in Natural Resource Sociology. Dr. Landis eventually became the official State Professor of Sociology and Dean of Graduate School at Washington State University. Landis also served as President of the Rural Sociological Society from 1945-1946.