Idolatry and the Construction of the Spanish Empire 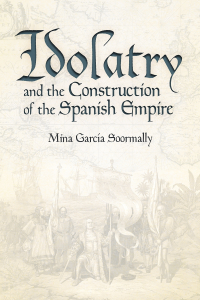 “An informative and thought-provoking text that provides a deeper look into the theological machinations of Spain’s religious trajectory as carried out in the peninsula and the colonies. . . . The author takes transatlantic colonial scholarship further than many scholars have dared to go.”
—Marie-Theresa Hernandez, University of Houston

"The author’s arguments are sustained by a carefully curated selection of primary sources, some of which deserve to be better known by scholars and students of idolatry in early colonial Spanish America."
—Bulletin of Spanish Studies

“The frequent connections drawn across the Atlantic are thought-provoking and worthy of further exploration.”
—International Journal of Latin American Religions

"The comprehensive research Soormally completed to create this transatlantic study is unique in that it underpins the transfer of religious conquering practices of one group of inferior people to another group in unexplored lands."
—The Middle Ground Journal

An ethnohistory on the spiritual and governmental conquest of the indigenous people in colonial Mexico, Idolatry and the Construction of the Spanish Empire examines the role played by the shifting concept of idolatry in the conquest of the Americas, as well as its relation to the subsequent construction of imperial power and hegemony.

Contrasting readings of evangelization plays and chronicles from the Indies and legislation and literature produced in Spain, author Mina García Soormally places theoretical analysis of state formation in Colonial Latin America within the historical context. The conquest of America was presented, in its first instances, as a virtual extension of the Reconquista, which had taken place in Spain since 711, during which Spaniards fought to build an empire based in part on religious discrimination. The fight against the “heathens” (Moors and Jews) provided the experience and mindset to practice the repression of the other, making Spain a cultural laboratory that was transported across the Atlantic Ocean.

Idolatry and the Construction of the Spanish Empire is a wide-ranging explication of religious orthodoxy and unorthodoxy during Spain’s medieval and early modern period as they relate to idolatry, with analysis of events that occurred on both sides of the Atlantic. The book contributes to the growing field of transatlantic studies and explores the redefinition that took place in Europe and in the colonies.

Mina García Soormally is associate professor of Spanish in the Department of World Languages and Cultures at Elon University, where her research focuses on early modern Spanish theater and trans-Atlantic studies. She is the author of Magia, hechicería, y brujería: Entre La Celestina y Cervantes.