The Owl Was a Baker’s Daughter 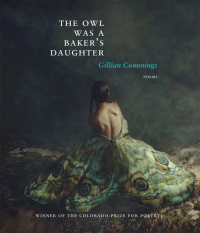 Winner of the 2018 Colorado Prize for Poetry

“Gillian Cummings’s The Owl Was a Baker’s Daughter is a stunning collection of lyrics in which the littleness and almostness of girlhood is held close and wants the clean madness of God. There’s a healing here, or a hope for one, for the kind of forgetting that can let us escape ‘death’s ongoing everness.’ Inspired by Ophelia’s dialogue in Hamlet and numerous Buddhist sutras, these poems deftly navigate metamorphosing images, gloriously elastic syntax, and the terrible failures of prayer. Here, the ethereal moon-girls and liminal clouds remind us why, despite love’s erasures and heaven’s grief over us, we stay on this earth.”
—Traci Brimhall

“The Owl Was a Baker’s Daughter begins with ‘meanwhile,’ en media res, and immediately we find ourselves deep inside the world of these poems—a world both herbarium and aviary, both meadow and sea; a world lush with loosestrife and moss, honey bees and seahorses, and ‘the shut eyes of rocks’; a world haunted by the spirit of Shakespeare’s Ophelia. The hallmarks of Gillian Cummings’s work are here: the integrity of each line, a poem itself, and her ear for music. The poems, mothlike, ‘lift, / lift lightly, spiral-whirl. They flicker and fleck, weaving a world’—one that is imaginative, complex, and original.”
—Maggie Smith

“Individually exquisite, her poems delight in hydrangea, buckthorn, beech; in magpies, doves, chipmucks. . . .At times, reading The Owl is like driving in the dark through a blizzard, snowflakes hurling themselves at the windshield in a bewilderment of beauty. The guard rail lies perilously obscured at the road’s edge. ”
—Critical Flame

“Cummings’ “Ophelia” examines her world in a peculiar and piercing way. The result is nothing short of beautiful sadness—the very definition of melancholy. Readers, you will be mesmerized and moved by this work.”
—Drizzle Review

In The Owl Was a Baker’s Daughter, Gillian Cummings gives voice to her version of Ophelia, a young woman shattered by unbearable losses, and questions what makes a mind unwind till the outcome is deemed a suicide. Ophelia’s story, spoken quietly, lyrically, in prose poems whose tone is unapologetically feminine, is bracketed by short, whittled-down once-sonnets featuring other Ophelias, nameless “she” and “you” characters who address the question of madness and its aftermath. These women and girls want to know, what is God when the soul is at its nadir of suffering, and how can one have faith when living with a mind that wants to destroy itself?

If it is true, as Joseph Campbell said, that “the psychotic drowns in the same waters in which the mystic swims with delight,” then Cummings strains the boundaries of this notion: “Is it the same? The desire to end a life / and the need to know how: a flower’s simple bliss?” Her women and girls, part “little heavenling” and part “small hellborn,” understand the emptiness of utmost despair and long for that other emptiness, which can be thought of as union with God, the death of the troublesome ego. Cummings’s poetic ancestors may be Dickinson and Plath and her source here Shakespeare, but more contemporary voices also echo in her poems, those of Lucie Brock-Broido, Larissa Szporluk, and Cynthia Cruz. Here, in The Owl Was a Baker’s Daughter, is what might happen if, after sealing off the doors and turning on the gas, indeed, after dying, a poet had come to embrace the holiness in how “all dissolves: one color, / one moon, all earth, red as love, red as living.”

Gillian Cummings is the author of My Dim Aviary, winner of the 2015 Hudson Prize, as well as the chapbooks Ophelia, Petals as an Offering in Darkness, and Spirits of the Humid Cloud. Her poems have appeared in Boulevard, the Cincinnati Review, Colorado Review, Denver Quarterly, the Laurel Review, the Massachusetts Review, Quarterly West, Verse Daily, and others. A graduate of Stony Brook University and of Sarah Lawrence College’s MFA program, she was awarded the Dorothy Sargent Rosenberg Memorial Fund Poetry Prize in 2008. Cummings lives in Westchester County, New York.