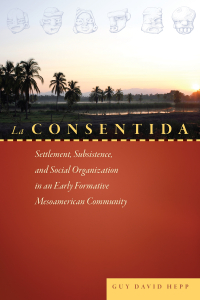 “We have such painfully limited information about the earliest lifeways in Mesoamerica that resulted in farming and permanent communities that a carefully executed study such as this is extremely welcome.”
—Barbara L. Stark, Arizona State University

La Consentida explores Early Formative period transitions in residential mobility, subsistence, and social organization at the site of La Consentida in coastal Oaxaca, Mexico. Examining how this site transformed during one of the most fundamental moments of socioeconomic change in the ancient Americas, the book provides a new way of thinking about the social dynamics of Mesoamerican communities of the period.

Guy David Hepp summarizes the results of several seasons of fieldwork and laboratory analysis under the aegis of the La Consentida Archaeological Project, drawing on various forms of evidence—ground stone tools, earthen architecture, faunal remains, human dental pathologies, isotopic indicators, ceramics, and more— to reveal how transitions in settlement, subsistence, and social organization at La Consentida were intimately linked. While Mesoamerica is too diverse for research at a single site to lay to rest ongoing debates about the Early Formative period, evidence from La Consentida should inform those debates because of the site’s unique ecological setting, its relative lack of disturbance by later occupations, and because it represents the only well-documented Early Formative period village in a 300-mile stretch of Mexico’s Pacific coast.

Guy David Hepp is assistant professor of anthropology at California State University, San Bernardino. His research is focused on early complex societies of Mesoamerica. He has published several papers regarding mortuary practice at La Consentida and the iconography, depositional context, technological characteristics, and cosmological implications of ancient ceramic figurines and musical instruments.