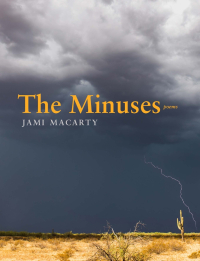 “Jami Macarty’s poems draw us into the vagaries of human love, just as they implicate us in the ‘menagerie of the surviving world.’ These marvellously immersive poems of the Sonoran Desert and of our human deserts of the heart insist on each step taken, each present moment’s opening perception. Macarty’s lines nudge us toward non-dual Buddhist emptiness in each gap, each leap beyond wording. A must-read.”   —Daphne Marlatt

“In these quiet, careful, though searing and poignant poems, Jami Macarty turns her considerable powers toward the dissolution of a romantic relationship in a desert landscape that is at once sustaining and doomed. Here, a body is at one with earthly extinction and failed romance: ‘I am your time to go now.’ These poems are as full of heart as they are of a keen intellect. Exquisitely honed and crafted, The Minuses provides testament to poetry’s ability to speak the unspeakable, to not only survive but to carry on: ‘she’s off-trail but knows her direction.’ This is a beautiful book of courage and the power to live fully, and on this planet, through heartbreak and hard-won joy.”
—Gillian Conoley

"The poems in Jami Macarty’s devotional collection swing upon a hinge that is the recurring site of the poet’s perception in time, where what is seen shows the inherent connection of each thing to its other: ‘honey given / honey taken.’ The Minuses’ brilliance lives in what the poet is able to give up for the possibility of finding a wholeness that is ongoing: ‘I come and go / from myself as I am / I will not return.’ A seer is, after all, one who sees. Jami Macarty is one who sees.”
—Claudia Keelan

"The poems in The Minuses are composed as accumulations of declarations and description, that concurrently linearly build, and collage as lyric patchworks."
—Rob Mclennan's Blog

Conjuring the literature of the desert, such as If There Were Anywhere But Desert by Edmond Jabès, Desert Solitaire by Edward Abbey, and Land of Little Rain by Mary Austin, Jami Macarty’s The Minuses beckons attention to ecological and feminist issues and the co-incidence of eating disorders, sexual harassment, family and intimate partner violence, homelessness, suicide, environmental destruction, and other forms of endangerment. Seeking escape from relationship, belief, and self, multi-perspective survivors claim voice as contemplators of natural splendors, and as seekers of incarnate desires. These voices amplify the precariousness that predicates women's lives and the natural world, laying bare the struggle and faith required to endure with integrity and spirit intact.

Jami Macarty teaches poetry and poetics at Simon Fraser University. Cofounder and editor of The Maynard, former executive director of Tucson Poetry Festival, and a member of the Community of Writers at Squaw Valley, she is the author of three chapbooks of poetry: Instinctive Acts (Nomados Literary Publishers, 2018), Landscape of The Wait (Finishing Line Press, 2017), and Mind of Spring (Vallum Chapbook Series, 2017), winner of the 2017 Vallum Chapbook Award. She is a recipient of grants from Arizona Commission on the Arts and BC Arts Council, and her poems appear in Arc Poetry Journal, Beloit Poetry Journal, The Capilano Review, Interim, The Rumpus, Volt, and more. For more information, visit www.jamimacarty.com.