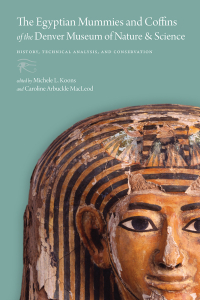 Copublished with the Denver Museum of Nature & Science

“One of only a few comprehensive discussions of the multi-method analysis of mummies and coffins, and possibly the only one to include imaging, elemental analysis, historical context, and conservation in a single volume. . . . An important contribution to the scholarship on Ancient Egyptian mummies.”
—Andrew Nelson, Western University, Ontario

“This book will make a major contribution to the field and will be a useful reference for Egyptologists, conservators, and materials scientists.”
—Lorelei Corcoran, Institute of Egyptian Art & Archaeology, University of Memphis

In the 1970s and 1980s, the Denver Museum of Nature & Science acquired two ancient Egyptian mummies and three coffins. The mummies are the remains of two women who lived in an unknown locale in ancient Egypt. They both died in their thirties and have now been subjected to a number of unpublished scientific and unscientific analyses over the years. In 2016, as DMNS prepared to update its Egyptian Hall, staff scientists decided to reexamine the mummies and coffins using innovative, inexpensive, and accessible techniques.

This interdisciplinary volume provides a history of the mummies’ discovery and relocation to Colorado. It guides the reader through various analytical techniques, detailing past research and introducing new data and best practices for future conservation efforts. The new analysis includes more accurate radiocarbon dating, fully comprehensive data from updated CT scans, examples of Egyptian blue and yellow pigments on the coffins uncovered by non-invasive x-ray fluorescence, unprecedented analysis of the coffin wood, updated translations and stylistic analysis of the text and imagery on the coffins, gas chromatography of the paints and resins, linen analysis, and much more.

The Egyptian Mummies and Coffins of the Denver Museum of Nature & Science provides replicable findings and consistent terminology for institutions performing holistic studies on extant museum collections of a range of material types. It will add substantially to what we know about the effective conservation of Egyptian mummies and coffins.

Michele L. Koons is the curator of archaeology at the Denver Museum of Nature & Science and has conducted archaeological research throughout the United States, Peru, Bolivia, Chile, and China. She codirects archaeological projects in New Mexico, Peru, and Colorado, including the Magic Mountain Community Archaeology Project, which won the Society for American Archaeology Award for Excellence in Public Education and the Josephine H. Miles History Award for significant advancement of Colorado history.

Caroline Arbuckle MacLeod is a postdoctoral researcher and teaching fellow at the University of British Columbia. She specializes in the study of ancient Egyptian wooden coffins and is also involved in projects related to digital archaeology and the history and practice of women archaeologists. She has worked with museums in the United States, Canada, England, Italy, and Egypt, including serving as director for a Museology and Egyptian Material Culture field school held at the Museo Egizio in Turin.