Engaged Archaeology in the Southwestern United States and Northwestern Mexico 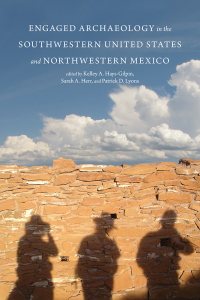 “Timely and highly relevant for archaeologists today and going forward. . . . [A] call to action in terms of what the next several decades should look like in our profession.”
—Deborah Huntley, Archaeology Southwest

This volume of proceedings from the fifteenth biennial Southwest Symposium makes the case for engaged archaeology, an approach that considers scientific data and traditional Indigenous knowledge alongside archaeological theories and methodologies. Focusing on the southwestern United States and northwestern Mexico, the contributors show what can be gained when archaeologists engage with Indigenous communities and natural scientists: improved contemporary archaeological practice through better understandings of heritage and identity, anthropogenic landscapes, and societal potential for resilience.

Organized around the theme of interdisciplinary perspectives, the book highlights collaborations with those who have other ways of knowing the past, from the traditional and proprietary knowledge of communities to new scientific methods, and considers the social context of archaeological practice and the modern relationships that inform interpretations of the past. Chapters show how cutting-edge practices lead to new archaeological understandings when archaeologists work in partnership with descendant and stakeholder communities and across international and disciplinary borders. Authors work across anthropological subfields and with the sciences, demonstrating that anthropological archaeology’s methods are starting points for investigation that allow for the expansion of understanding by incorporating long-remembered histories with innovative analytic methods.

Engaged Archaeology in the Southwestern United States and Northwestern Mexico identifies current and near-future trends in archaeological practice in the US Southwest and northwestern Mexico, including repatriation, community engagement, and cross-disciplinary approaches, and focuses on Native American archaeologists and their communities, research, collaborations, and interests. It will be of interest to archaeologists and anthropologists working in the Southwest and to any researchers interested in interdisciplinary approaches to archaeology, heritage studies, and the natural sciences.

Kelley A. Hays-Gilpin is professor of anthropology at Northern Arizona University and curator of anthropology at the Museum of Northern Arizona. She has over thirty years of experience studying rock art, pottery, and other visual arts in the Southwest, and her research focuses on the long-term histories of Hopi and Zuni communities and their artistic expressions of relationships with land and water.

Sarah A. Herr is president of Desert Archaeology Inc. in Arizona and editor of the Society for American Archaeology journal Advances in Archaeological Practice. Her research interests include population mobility, the development of frontiers, ceramic analysis, and the history, practice, and ethics of archaeology.

Patrick D. Lyons is director of the Arizona State Museum and associate professor in the School of Anthropology at the University of Arizona. His research focuses on ancient migrations in the US Southwest, the use of ceramics in understanding the lives of ancient peoples, the use of tribal oral tradition in archaeological studies, and the archaeology, history, ethnography, and ethnohistory of the Hopi people.