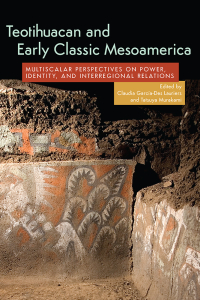 The Early Classic period in Mesoamerica has been characterized by the appearance of Teotihuacan-related material culture throughout the region. Teotihuacan, known for its monumental architecture and dense settlement, became an urban center around 150 BC and a regional state over the next few centuries, dominating much of the Basin of Mexico and beyond until its collapse around AD 650. Teotihuacan and Early Classic Mesoamerica explores the complex nature of Teotihuacan’s interactions with other regions from both central and peripheral vantage points.

The volume offers a multi-scalar view of power and identity, showing that the spread of Teotihuacan-related material culture may have resulted from direct and indirect state administration, colonization, emulation by local groups, economic transactions, single-event elite interactions, and various kinds of social and political alliances. The contributors explore questions concerning who interacted with whom; what kinds of materials and ideas were exchanged; what role interregional interactions played in the creation, transformation, and contestation of power and identity within the city and among local polities; and how interactions on different scales were articulated. They reveal an Early Classic Mesoamerican world engaged in complex economic exchanges, multi-directional movements of goods and ideas, and a range of material patterns that require local, regional, and macro-regional contextualization.

Claudia García-Des Lauriers is associate professor of anthropology; interim director of the Kellogg Honors College at California State Polytechnic University, Pomona; and director of the Proyecto Arqueológico Los Horcones. She is coeditor of Archaeology and Identity in the Pacific Coast and Highlands of Mesoamerica. Her research focuses on the art and archaeology of Teotihuacan and the Pacific coast of Chiapas, archaeology and identity, and economic and ideological manifestations of interaction

Tatsuya Murakami is associate professor in the Department of Anthropology at Tulane University. He is codirector of an archaeological project at the Formative site of Tlalancaleca, Puebla, Mexico, investigating sociopolitical dynamics in an early urban center and the broader regional and macroregional processes leading to state formation at Teotihuacan.