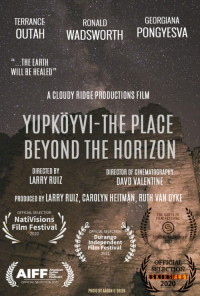 Yupköyvi – The Place Beyond the Horizon is being featured this month at the Durango Independent Film Festival (March 3-12, 2021)

Independent filmmaker Larry Ruiz's Yupköyvi is an offshoot of the Hopi Perspectives video chapter (Chapter 9) in The Greater Chaco Landscape, edited by Ruth M. Van Dyke and Carrie C. Heitman. The film was also a selection of The Santa Fe Film Festival in February 2021.

Ruth M. Van Dyke is professor of anthropology at Binghamton University, SUNY. She is an archaeologist specializing in the North American Southwest, and her research interests include landscape, architecture, power, memory, phenomenology, and visual representation. She has written some fifty articles and book chapters, and she is author or editor of six books, including Subjects and Narratives in Archaeology and The Chaco Experience. She directs projects on the Chaco landscape in northwest New Mexico and on historic Alsatian immigration in Texas. 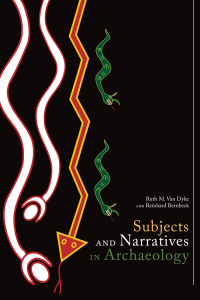 Subjects and Narratives in Archaeology

Subjects and Narratives in Archaeology Media

Back to the Main Book Page

The Docudrama (2011), by Mrs. Mary Praetzellis with the assistance of Dr. Adrian Praetzellis

Mud Fights: A Play in One Act, Two Scenes by Jim Gibb and directed by Terry Averill

Terry Averill (Director, Producer) is an architect in Annapolis but a regular contributor to local theater, directing, acting in, and designing productions throughout the area over the last fifteen years. Terry regularly appeared as John Brown at the National Museum of American History 2011–14 in The Trial of John Brown. His last acting in Annapolis was in the Colonial Players Theater’s Superior Donuts, for which he received a WATCH nomination for best lead actor in a play.

Ben Carr (James Beard) has performed at Colonial Players Theater in Annapolis as Kiril Ivakina in Superior Donuts, Donny in Rocket Man, Biff Loman in Death of a Salesman, Michael Wells in Two Rooms, Tom Donahue in These Shining Lives, and Hertel Daggett in Dog Logic. He has also performed at Standing O Productions in Retreat from Moscow and Tracers and at Dignity Players in Stones in His Pocket.

Jim Gibb (Playwright) has spared the world by staying off the stage. Raised by parents who thought regular theater attendance might somehow improve character and literacy, Jim has never aspired to be an actor, director, stage crew, or playwright. But one day he was asked by the development officer of a historic site on which he was leading an archaeological team to write a Halloween play. He responded as any longtime consultant would: with a shrug and a “why not?” He has since explored the potential for writing informed fiction to aid research.

Theresa Mason Riffle (Sound Engineer/Designer) is a musician, singer, songwriter, and music instructor. She has designed sound for a number of Washington, DC, area community theater plays. In 2015, she won a WATCH award for her sound design for the play Coyote on a Fence.

Tim Sayles (John Semple) is a freelance writer, editor, and magazine consultant in Annapolis, Maryland,where he served for eighteen years as editor in chief of Chesapeake Bay Magazine. In his spare time, he is a busy voice and stage actor, as well as marketing director for the Colonial Players of Annapolis, one of the Washington area’s oldest and best-known community theaters. Tim has on-stage experience in a variety of UK and American dialects, including RP British, Cockney, Irish, Scottish, Chicago, New York, and Texas, as well as German, Russian, and eastern European accents. On stage he has played everything from the Romanian bad guy of Lillian Hellman’s Watch on the Rhine to the dancing, singing Daddy Warbucks of the musical Annie.

David Thompson (John Hanson) has performed in the Annapolis area for the past fifteen years. He most recently played the role of Lt. Col. Nathan Jessup in the WATCH nominated A Few Good Men at Colonial Players Theater, where he has also played the title role in Pippin, Utterson in Jekyll & Hyde, Booth in Assassins, and Einstein in Picasso at the Lapin Agile. Other credits include the title role in Sweeney Todd, David in the American Premiere of Terrance Rattigan’s After the Dance, Panch in The 25th Annual Putnam County Spelling Bee, and Molokov in Chess. He has also sung locally with the Annapolis Chorale and Chamber Chorus as well as the Chesapeake Chorale.

Paul Valleau (Archaeologist) moved to the great state of Maryland two years ago and has never looked back. Paul’s theatrical experience began in 2009 in Des Moines, Iowa. He has performed as Leo Bloom in The Producers, Robert in Don’t Dress for Dinner, Kent Reasons in To Be Pretty, and numerous other roles while living in Des Moines. Just before moving to Maryland he was invited to perform at a corporate stag show in Dubai, UAE. Since moving to Maryland, Paul has performed with the Colonial Players of Annapolis twice: as Leo in In the Next Room and as Lt. Kaffee in A Few Good Men. Performance is only one direction of many to clarity, each time we perform, we become clear, we become bright.

Back to the Main Book Page 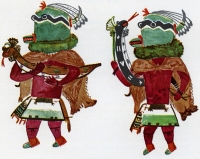 The Art of Archaeology: Conveying Science in Nonscientific Ways

Every nine-year-old loves the idea of archaeology—the prospect of digging in the dirt and finding mysterious objects once touched by people from the past. A few of us actually grow up to do this for a living. Along the way we learn the complexities of our craft, and we master its intellectual traditions. We learn to practice anthropology with a material focus, engaging with human lives past and present. 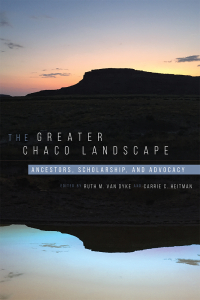 Unveiling Our New Look at the SAA