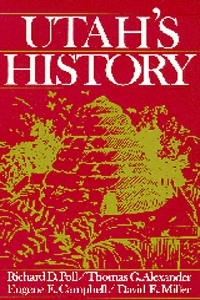 This is the most comprehensive volume available on Utah's unique and varied history. From the earliest desert cultures to Utah society in the 1980s, this collection considers social, economic, political, and cultural aspects, some controversial, of the state's history.

Richard D. Poll was a history professor at Brigham Young University, served as associate director of the BYU Honors Program, and was named Honors Professor of the Year at BYU in 1969. He also served as vice president of Western Illinois University.

Eugene E. Campbell was a professor of history at Brigham Young University and a founding member and early president of the Mormon History Assocation.

David E. Miller was a renowned authority on the Great Salt Lake and Utah's historic trails. He taught at the University of Utah, where he was a founder of the Alpha Rho Chapter of the national history honorary society Phi Alpha Theta (one of the first chapters), a head of the History Department, a president of the Utah Academy of Sciences, Arts, and Letters, and a founder of the American West Center.