From Mormon Crossing to National Park 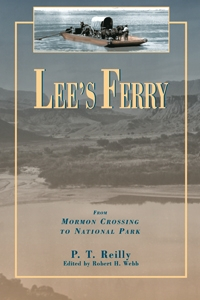 The Colorado River and its deeply entrenched canyons create a lengthy barrier to travel in the interior West. Here and there, ancient Indian foot trails descend canyon walls and find access to the river, but one of the few places between California and Nevada where wheeled vehicles can approach it is at the mouth of the Pahreah River, between Glen Canyon and the river's steep drop toward Grand Canyon. Here, from the mid-nineteenth until well into the twentieth century, Lee's Ferry was a primary link between Utah and Arizona. Mormons trying to reach potential Indian converts and new lands for colonization to the south first developed the site. John D. Lee and parts of his family, seeking an inconspicuous spot after the Mountain Meadows massacre, first took up residence at what they called Lonely Dell. In subsequent decades, many interesting and important western characters passed through this topographical and historical funnel, from John Wesley Powell to Buffalo Bill. As river exploration and adventure increased, the place became as important to those using the river-surveyors, miners, river runners-as to folks crossing it. In recognition of its importance, Lee's Ferry has been partially restored as a historic site in the national park system.

P. T. Reilly, himself a legend on the river as boatman and chronicler, wrote the detailed and colorful history this place demanded, focusing on stories of the hodgepodge of people it attracted. He died before he finished reworking his massive narrative into book form, but Robert H. Webb, author of Grand Canyon: A Century of Change, completed that job and selected rare historical photos from the Reilly collection at Northern Arizona University to illustrate it. An epilogue by Richard Quartaroli provides a biographical sketch of P. T. Reilly.

Robert H. Webb is a research advisor with the U.S. Geological Survey in Tucson, Arizona.