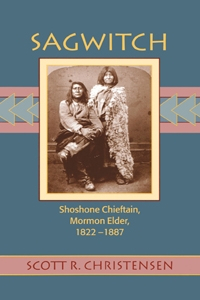 "Scott R. Christensen has written a landmark biography of Sagwitch . . . ."

The Northwestern Shoshone knew as home the northern Great Salt Lake, Bear River, Cache, and Bear Lake valleys of northern Utah. Sagwitch was born at a time when his people traded with the mountain men. In the late 1850s, wagons brought Mormon farmers to settle in Cache Valley, the Northwestern Shoshone heartland. Emigrants and settlers reduced Shoshone access to traditional village sites and food resources. Relationships with the Mormons were mostly good but often strained, and the Shoshone treatment of migrants, who now traveled north and south as well as west and east through the area, was increasingly opportunistic. It only took a few violent incidents for a zealous army colonel to seek severe punishment of the Northwestern Shoshone on a winter morning in 1863. The Bear River Massacre was among the bloodiest engagements of America's Indian wars. Hundreds of Shoshone, including Sagwitch's wife and two sons, died; Sagwitch was wounded but escaped. The band was shattered, other chiefs dead.

The following years were very hard for the survivors. The federal government negotiated a treaty with them but failed to get Sagwitch's signature when, en route to the sessions, he was arrested and then wounded by a white assassin. With the world around him changed, Sagwitch sought accommodation with the most immediate threat to his people's traditional way of survival—the Mormons occupying the Shoshone's valleys.

This, then, is also the story of the conversion of Sagwitch and his band to the Mormon Church. Though not without problems, that conversion was long lasting and thorough. Sagwitch and other Shoshone would demonstrate in important ways their new religious devotion. With the assistance of Mormon leaders, they established the Washakie community in northern Utah. Though efforts to secure a land base had an uneven history, they partly succeeded, and the story of these Shoshone's attempts at rural farming diverged significantly from what happened on government reservations. When Sagwitch died, his death went almost unnoticed outside of Washakie, but his children and grandchildren continued to be important voices among a people who, after experiencing near annihilation, survived in the new world into which Sagwitch led them.

Scott R. Christensen is a historian and archivist and is employed by the Church of Jesus Christ of Latter-Day Saints Archives in Salt Lake City, Utah.