Traditions of Belief in Story and Discourse 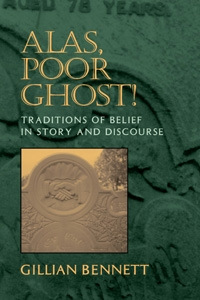 "What could have been a simple survey of belief ramified into an investigation of the use of language, the self-perception of women, the make-up of women's lifestyles and other related issues."
—Northern Earth

"Bennett's object is neither to support nor to refute such grassroots beliefs in the supernatural, but to 'explore the relationship between narrative and belief.'"
—Elizabeth Wein, Journal of American Folklore

In the rational modern world, belief in the supernatural seemingly has been consigned to the worlds of entertainment and fantasy. Yet belief in other worldly phenomena, from poltergeists to telepathy, remains strong, as Gillian Bennett's research shows. Especially common is belief in continuing contact with, or the continuing presence of, dead family members. Bennett interviewed women in Manchester, England, asking them questions about ghosts and other aspects of the supernatural. (Her discussion of how her research methods and interview techniques evolved is in itself valuable.) She first published the results of the study in the well-received Traditions of Belief: Women and the Supernatural, which has been widely used in folklore and women's studies courses. Alas, Poor Ghost! extensively revises and expands that work. In addition to a fuller presentation and analysis of the original field research and other added material, the author, assisted by Kate Bennett, a gerontological psychologist, presents and discusses new research with a group of women in Leicester, England.

Bennett is interested in more than measuring the extent of belief in other worldly manifestations. Her work explores the relationship between narrative and belief. She anticipated that her questions would elicit from her interviewees not just "yes" or "no" replies, but stories about their experiences that confirmed or denied notions of the supernatural. The more controversial the subject matter, the more likely individuals were to tell stories, especially if their answers to questions of belief were positive. These were most commonly individualized narratives of personal experience, but they contained many of the traditional motifs and other content, including belief in the supernatural, of legends. Bennett calls them memorates and discusses the cultural processes, including ideas of what is a "proper" experience of the supernatural and a "proper" telling of the story, that make them communal as well as individual. These memorates provide direct and vivid examples of what the storytellers actually believe and disbelieve. In a final section, Bennett places her work in historical context through a discussion of case studies in the history of supernatural belief.

Gillian Bennett is an independent scholar specializing in ghost stories and contemporary legends. She worked in these fields for twenty years while a Research Associate of the National Centre for English Cultural Tradition at the University of Sheffield, UK, and a Research Fellow at the Centre for Human Communication at Manchester Metropolitan University, Manchester, UK. With Paul Smith she has edited or compiled six books on contemporary legend. She served as editor of the British journal Folklore.