Worth Their Salt, Too 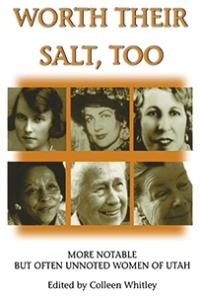 A follow-up to the highly successful Worth Their Salt, published in 1996, Worth Their Salt, Too brings together a new set of biographies of women whose roles in Utah's history have not been fully recognized, despite their significance to the social and cultural matrix, past and present, of the state. These women—community and government leaders, activists, artists, writers, scholars, politicians, and others—made important contributions to the state's history and culture. Some of them had experiences that reveal new aspects of the state's history, while others simply led lives so interesting that their stories beg to be told. This new collection demonstrates, as Worth Their Salt did, the diversity of Utah's society and the many different roles women have played in it.

All sixteen biographies are original pieces by many noted authors from around the state, including Jeffery, Johnson, Kristen Rogers, Carma Wadley, Patricia Lynn Scott, and Judy Dykman. As with Worth Their Salt, Colleen Whitley was asked to be a guest lecturer for the Utah Humanities Council for the 2000 calendar year. All royalties from the sale of Worth Their Salt, Too will be donated to the Utah Historical Society Library.

The Association for Mormon Letters, 2000

Colleen K. Whitley is the author of five books on Utah history and numerous articles, poems, and reviews. She taught for 20 years at Brigham Young University in the English and Honors Departments and serves on the editorial board of Utah Historical Quarterly.