The Journey of Navajo Oshley

An Autobiography and Life History 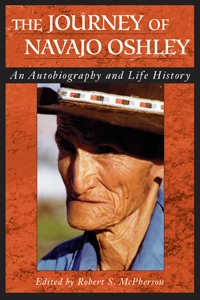 Winner of the 2000 Evans Handcart Award

Ak'é Nýdzin, or Navajo Oshley, was born sometime between 1879 and 1893. His oral memoir is set on the northern frontier of Navajo land, principally the San Juan River basin in southeastern Utah, and tells the story of his early life near Dennehetso and his travels, before there were roads or many towns, from Monument Valley north along Comb Ridge to Blue Mountain. During the late nineteenth and early twenieth centuries, Anglos and Navajos expanded their use and settlement of lands north of the San Juan. Grazing lands and the Anglo wage economy drew many Navajos across the river. Oshley, a sheepherder, was among the first to settle there. He cared for the herds of his extended family, while also taking supplemental jobs with the growing livestock industry in the area.

His narrative is woven with vivid and detailed portraits of Navajo culture: clan relationships, marriages and children, domestic life, the importance of livestock, complex relations with the natural world, ceremonies, trading, and hand trembling.