One Side by Himself 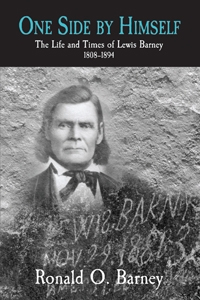 "What an astonishing life and what a remarkable biography. Lewis Barney's sojourn on the hard edge of the American frontier is a forgotten epic. Not only does this book tell of an amazing personal odyssey from his birth in upstate New York in 1808 to his death in Mancos, Colorado, in 1894, but Barney's tale represents a living evocation of some of the most significant themes in American history. Frederick Jackson Turner theorized that the frontier shaped our national character, but Lewis Barney's life stands as a testament to the real impact of the westering experience on a man and his family. Ron Barney's detailed biography of Lewis Barney provides a participant's view of Mormonism's first six decades of controversy, hardship, and triumph, viewed from the bottom of the social heap. Despite his wide-ranging experience and endless sacrifices, Lewis Barney was a worker in the Mormon vineyard, not one of the princes of the Kingdom of God whose lives have been so exhaustively celebrated. Barney's lack of status in this complex hierarchy adds tremendously to the value of this study, since so much nineteenth-century LDS biography has ignored the lives of ordinary people to celebrate a surprisingly small elite whose experiences were far different from those of the general Mormon population."

—Will Bagley, editor of the series Kingdom in the West and of The Pioneer Camp of the Saints

"This fine biography is especially good in two regards. The biographical information about Lewis Barney and his family is thorough and relatively objective. Even better is the material that establishes a context for his life. . . . [It] is a readable, enjoyable book, one I recommend to both academic and general readers."

—The Annals of Iowa

"The awards earned by this book are well-deserved. . . . The research seems to me to be meticulous, the writing extraordinarily good, and the bibliography impressive. Pictures and illustrations are interesting and helpful. The words quoted from Lewis Barney’s autobiography add life, drama, and sometimes humor . . ."

"This is a book that delivers what it promises. Because it does, we have a better understanding of the Mormon frontier, a clearer picture of nineteenth-century family life, a stark sense of ecomonic pressures and limitations that heads of households had to face, and a deeper appreciation for the strength, difficulties, and realities of Mormon community life."

Ronald O. Barney is senior archivist in the department of Family and Church History of The Church of Jesus Christ of Latter-day Saints, where he has worked for twenty-six years. He is the great-great-grandson of Lewis Barney.