The Mormon Vanguard Brigade of 1847 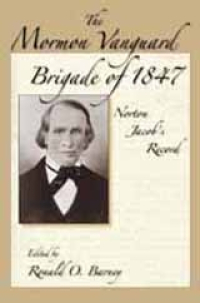 There are no historical events that have more iconic significance for the people of Utah than the westward trek of the vanguard company of Mormons in 1847. Its meaning may vary, but overall, the march has a highly symbolic and seminal historical importance for virtually all Utahns. While the journey has been widely celebrated, memorialized, and even sanctified, and various books have been written about it, there is more that can be said and understood about the migration's place in western history; about its context, including events preceding and following it; and about the real experiences of its participants. Particularly lacking in most published accounts are the stories of the rank and file members—the individuals who, in contrast to the well-known leadership with Brigham Young at the top, might fittingly be called foot soldiers. The 1847 company had a military-like organization, which is captured by Ronald Barney's term brigade in the title. Norton Jacob was such a man of the ranks in 1847. He had no special status in the Mormon Church, and there was little to make him stand out in the historical record than that he left what is regarded by many trail historians as one of the best and most informative journals of the early Mormon emigration. While the heart of Jacob's record concerns the 1847 journey, there is much more to it. The diary published here begins in 1844, the year of church founder Joseph Smith's murder. It continues through the crisis events that followed: the Mormons' flight from Nauvoo, their trudging journey across Iowa to Winter Quarters, and the beginnings of mass migration to Utah. After the apex of 1847, the arc of the narrative moves through accounts of Jacob's return to Nauvoo late that year and of the much larger Mormon emigration in 1848. It reaches denouement in a short record of his first years in Salt Lake Valley.

The Association for Mormon Letters, 2005, by Jeffrey Needle

Ronald O. Barney is senior archivist in the department of Family and Church History of The Church of Jesus Christ of Latter-day Saints, where he has worked for twenty-six years. He is the great-great-grandson of Lewis Barney.